Brazil superstar Neymar brushed off his critics after firing the five-time World Cup winners to victory over Mexico on Monday and enter into a quarter-final showdown with Belgium. 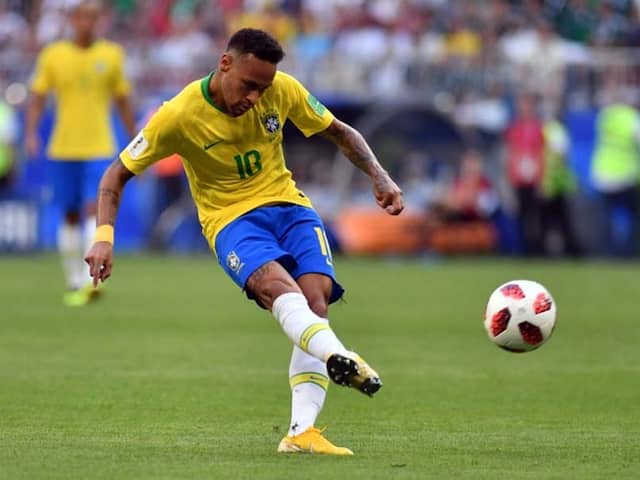 Neymar scored one goal as Brazil overpowered the Mexicans 2-0.© AFP

Brazil superstar Neymar brushed off his critics after firing the five-time World Cup winners to victory over Mexico on Monday and enter a quarter-final showdown with Belgium. Neymar scored one goal and created another as his increasingly impressive Brazil side overpowered the Mexicans 2-0 in sweltering conditions. But Neymar's sparkling performance was tarnished by yet another example of his tendency to overreact to seemingly innocuous challenges. The latest chapter in a bulging catalogue of histrionic behaviour came in the second half, when Mexico midfielder Miguel Layun appeared to step on his ankle as he lay prone.

Neymar writhed around and convulsed as if he had received an electric shock.

"We wasted a lot of time because of one single player ... we lost our style in the second half, because of the referee.

"This is a very bad example for the world and the world of football."

"There is no doubting the ability of him. He is a magnificent player," said Shearer, who is working in Russia for Britain's BBC.

"But it really is pathetic when he is rolling around as if he is in agony."

Yet Neymar shrugged off the criticism after his man-of-the-match performance, claiming it was motivated to "undermine me."

"I don't care much for criticism, or praise, because this can influence your attitude," he said.

"In the last two matches I didn't talk to the press because I don't want to. I just have to play, help my teammates, help my team."

Brazil defender Thiago Silva meanwhile heaped praise on Neymar, who only returned to playing shortly before the tournament following an injury layoff of more than three months.

"It's magnificent how he's playing, especially after three and a half months on the sidelines," PSG teammate Silva said. "It's very difficult to come back the way he's done."

Against Mexico, Neymar burst into life after Brazil weathered early pressure from opponents determined to end a 32-year wait to reach the quarter-finals.

The 26-year-old talisman struck the opening goal on 51 minutes to Brazil 1-0 up.

The Brazil talisman drew several defenders as he ran across the edge of the area with the ball at his feet, before passing to Willian and continuing his run into the box.

Willian duly returned the favour and Neymar was on hand to poke the Chelsea midfielder's superb delivery past Guillermo Ochoa.

The result was settled when Layun lost possession in the dying minutes. Neymar went on a counter-attack that drew Ochoa from his goal before finding Roberto Firmino with the finest of touches from the outside of his right boot.

But Silva is hoping Neymar emulates the recent feats of other Paris Saint-Germain clubmates Edinson Cavani and Kylian Mbappe on his way to taking Brazil further.

"It's true, I said this before this match," added Silva. "I hope he listens to me in the quarter-finals."

Mexico Neymar Brazil vs Mexico, Round of 16 Football 2018 FIFA World Cup
Get the latest Cricket news, check out the India cricket schedule, Cricket live score . Like us on Facebook or follow us on Twitter for more sports updates. You can also download the NDTV Cricket app for Android or iOS.