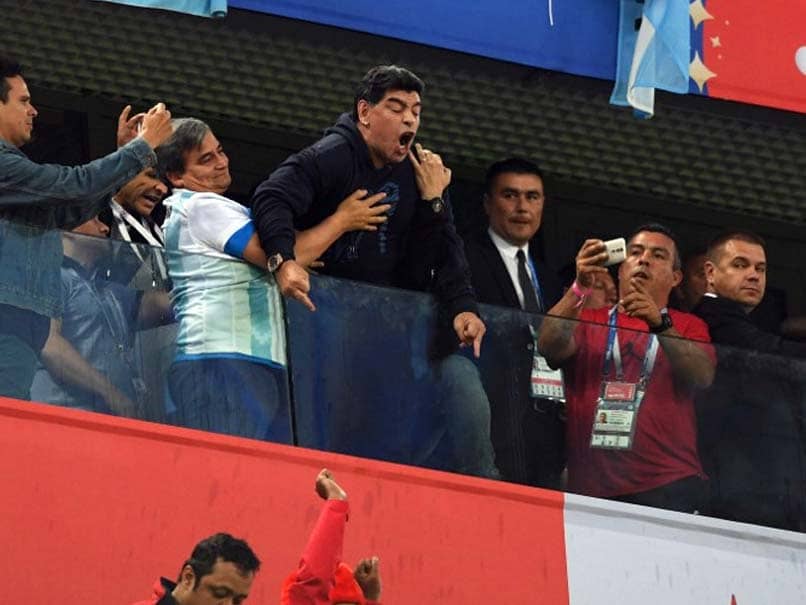 Diego Maradona has offered a USD 10,000 reward to identify the source of reports he had died.© AFP

Diego Maradona has offered a USD 10,000 reward to identify the source of reports he had died after Argentina's World Cup 2018 match against Nigeria, his lawyer said on Thursday. The reports, circulated via WhatsApp voice messages from a man with an Argentine accent, said the 57-year-old star had been hospitalized and had died of cardiac arrest. "I gave instructions to make public the decision to offer a reward of 300,000 pesos (around $10,000) to anyone who can provide true and accurate information about the author of the audios," lawyer Matias Morla told Argentina's Clarin daily from Russia.

The Argentine star took ill at the end of the match and had to be helped from his seat.

But he denied rumors of ill health the day after, telling reporters: "I'm perfect. I've never been better."

Morla said Maradona had suffered "a spike" in blood pressure.

According to Morla, Maradona shouldn't even have been at the stadium for the second half of the game, in which a late goal secured Argentina's World Cup.

"The doctors told him to rest, not to stay for the second half of the Argentina-Nigeria match, but asking that of Maradona is like asking a son not to love his mother."

"For Diego, the team is Dona Tota (his mother), and he will never let her on her own," he said.

The audio messages spread on social media after the match.

"Maradona's sisters heard the news, they could not communicate with me nor with their brother, and one of them suffered a weakness, and the truth is that we cannot let such an outrage go by," Morla told Clarin.

Lionel Messi 2018 FIFA World Cup Football
Get the latest updates on India vs Australia Series, check out the India vs Australia Schedule for 2020-21 and Ind vs Aus live score . Like us on Facebook or follow us on Twitter for more sports updates. You can also download the NDTV Cricket app for Android or iOS.