World Cup 2018, Brazil vs Switzerland Highlights: Brazil were held to a 1-1 draw against Switzerland at the Rostov Arena 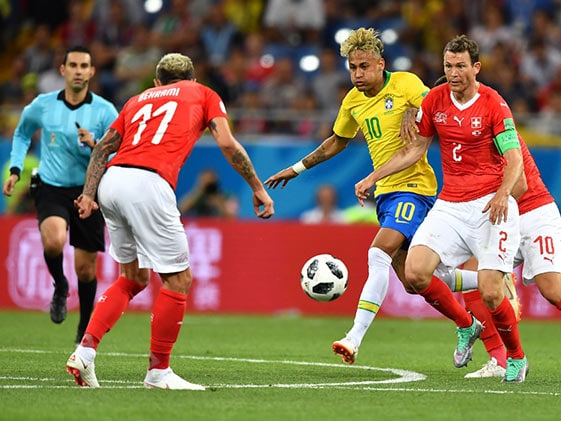 A resurrected Switzerland held five-time Champion Brazil to a 1-1 draw at the Rostov Arena on Monday. Stevan Zuber scored the equaliser (50th minute) to square off things on level terms early in the second-half. The Swiss side looked a better side in the final 45 minutes as they created chance after chance, opened up spaces for themselves and made the Brazil defence toil. Meanwhile, the Tite-managed Brazilian were given a reality check, early in the group stage of the FIFA World Cup 2018. Earlier, Brazil lead through Philippe Coutinho 1-0 against Switzerland at the Rostov Arena in the triple-header on Sunday. The five-time champions enjoyed a hint less share of possession but they still managed to get most shots on goal in the first-half. Switzerland, meanwhile through Zuber, Dzemaili and Behrami had moments of inspiration but failed to capitalise on the same. The Swiss have failed to get their combination and penetration right in the high intensity drama thoroughly dominated by Brazil as their star man Shaqiri has been kept quiet till the first 45 minutes. Coutinho holds a record for winning all the games for his national side in which he has scored, we will have to see another 45 minutes of play to see if the record remains. (Highlights: Brazil vs Switzerland)

01:25 IST: FINAL WHISTLE! A resurrected Switzerland in the second-half holds Brazil to 1-1 draw as the five-time World Champion open their World Cup campaign on a sour note. Neymar, in particular had too many poor shots, gave away the ball quite easily, not his standards! Not the result Brazil would have expected.

01:24 IST: Switzerland awarded a free-kick at half-line, taken quickly cleared away by the Brazilian defence as Brazil initiates an attack through Neymar who has been brought down for a free-kick! Neymar takes it, chips the ball in. Corner for Brazil, useless.

01:20 IST: Brazil keeping possession in the injury time, they had been outclassed in the second half in terms of ball control and shots on goal. Switzerland deserve to pull out a draw here.

01:18 IST: Firmino misses a close-range header from the box after a curling ball delivered by Neymar. 5 minutes added!

01:17 IST: Switzerland threaten on the counter, a lot of these have come through Shaqiri but the final shot gets wide. 89 minutes down!

01:13 IST: Shaqiri dances down the box, tries to get past Danilo but fails to get it right. Switzerland dominating possession, Brazil doing the clearing business, 85 minutes down.

01:05 IST: Neymar takes a long-ranger, but Sommer easily collects it in the goal. 77 minutes down. Firmino replaces Gabriel Jesus.

01:03 IST: Foul on Shaqiri by Coutinho, the game is getting intense here. Switzerland turning on the heart, will we see a late winner here?

01:01 IST: Gabriel Jesus has been brought down inside the box, referee denies a penalty. No VAR taken into consideration either. Clean tackle, referee suggests.

00:53 IST: Yellow card for shirt pulling to Schar on Neymar, offer Brazil a free-kick from the 22-yard mark in the 65th minute. Marcelo, Neymar lining up. Neymar takes a poor one, the ball played for a corner. Willian takes a shot, raising above the crossbar.

00:48 IST: Substitution for Brazil, Casemiro who received a yellow card in the first half has been replaced by Fernandinho in the 59th minute.

00:46 IST: Corner for Brazil, out-swinging one from Willian, well cleared by Schar. Brazil retains possession keeps the ball, Casemiro tries a shot on goal, skies it.

00:37 IST: CORNER FOR SWITZERLAND, Shaqiri swings the ball and Zuber who was left unmarked in the box nets the ball past Alisson. GOAL, equaliser in the 50th minute!

00:35 IST: Casemiro booked, for a wild challenge on Dzemaili in the 47th minute. Needs to keep his nerves a little bit here.

00:33 IST: Shaqiri gets the ball rolling in the second-half.

00:16 IST: Half-time, Brazil lead through Coutinho 1-0 and they rightly deserve to do so. Some brilliant attacking play was on put on display as the Swiss defence fails to maintain their shape. They will have to return stronger if they want to share spoils with the Brazilians, which at the moment looks unlikely.

00:12 IST: Waited game from Switzerland failing to find the combination right as Shaqiri on the right flank puts a cross inside the box, tucked away by the Brazilian defence.

00:09 IST: Thiago Silva has been hit on the head as Zuber tries to take a shot from inside the box in the 40th minute but the veteran looks well back on his feet.

00:06 IST: FACT, whenever Coutinho has scored for Brazil, they have won and this match is drifting in the five-time World Champions way except for a few occasions when the Swiss have shown some spark but failed to keep composure.

00:00 IST: Paulinho fouled! Wins the free-kick their own half in the 30th minute as Brazil initiates the attack, Neymar brought down again by veteran Lichtsteiner.

23:54 IST: CORNER FOR SWITZERLAND in the 24th minute. Rodriguez takes it, Brazil clears it as they had everyone waiting for the ball inside the box. Meanwhile, Casemiro and Schar are down in the box after a head on collision.

23:49 IST: GOAL! Philippe Coutinho with a curler from outside the box, helped on by the far post as Brazil takes an early 1-0 lead in the 20th minute. Switzerland stunned!

23:48 IST: Rodriguez for Switzerland, finds Behrmani who passes the ball to Xhaka -- who will be the playmaker for the Swiss, as they lose possession in the 18th minute.

23:44 IST: Foul on Neymar! Behrmani brings him down near the penalty box. Neymar to take the free kick in the 15th minute, hits the wall as Brazil retains possession.

23:43 IST: Marcelo to Jesus trying to find Willian on the opposite flank in the box but the ball goes wide, heavy touch there!

23:41 IST: Coutinho dribble past the defenders to find Neymar ahead of him in the box, who tucks the ball to Paulinho who misses the back of the net by a whisker in the 11th minute.

23:38 IST: Switzerland stretched! First real occasion when Brazil looked to combine well in the eighth minute after a attack initiated by Marcelo, Willian took it forward but Switzerland tackles it well.

23:35 IST: Brazil on the break, referee plays an advantage after Xhaka brings Neymar down and gets booked. Marcelo, meanwhile played a cross from the box to no one in particular. Goal kick!

23:32 IST: FIRST CHANCE OF THE GAME! Dzemaili for the Swiss gets a nice, cheeky ball in the box, which is skied high in the third minute.

23:30 IST: KICK-OFF! Gabriel Jesus gets the ball rolling for Brazil, he was painting the streets of Sao Paulo 4 years ago!

23:24 IST: National anthem has been played, we are 6 minutes away from the kick-off!

23:22 IST: Brazil and Switzerland have lined-up in the tunnel as they march on to take on the turf amidst a large cheer in a sea of yellow and red all around the stadium.

22:07 IST: Legend Pele has cautioned his former national team of the threat Swiss star Shaqiri carries. However, the formidable and well experienced Brazilian defence will aim to mark him tight to disallow him any sight of the goal.

21:57 IST: So is their first-choice goalkeeper Alisson Becker, Brazil looks set to leave a mark on the World map from the onset in the FIFA World Cup 2018.

21:55 IST: Neymar Jr looks ready to take the World by fire after a horrifying injury that ruled him out in the 2014 World Cup. The star forward has returned as the 'world's most expensive player' plenty of onus on him as his national side are on a World Cup drought since 2006.

21:30 IST: Hello and welcome to the live commentary from the Group E fixture between five-time World Champion Brazil and Switzerland.

Neymar, though, showed that he is ready for his assault, coming off the bench to score against Croatia and the producing a wonder strike in Brazil's win over Austria in Vienna a week back.

The 26-year-old, who saw his time on the sidelines as one of the lowest points in his career so far, has looked in excellent spirits this week as Tite's Brazil squad settle into their Russian base -- the speculation about his club future, and links with Real Madrid, seem far away right now.

Xherdan Shaqiri Neymar Gabriel Jesus 2018 FIFA World Cup Football Live Score Live Blogs Brazil vs Switzerland, Match 11 Football
Get the latest updates on ICC T20 Worldcup 2022, check out the Schedule and Live Score . Like us on Facebook or follow us on Twitter for more sports updates. You can also download the NDTV Cricket app for Android or iOS.