India star Ishan Kishan looked annoyed as an insect flew close to his face. Kishan looked perplexed and even looked towards Kuldeep Yadav by his side 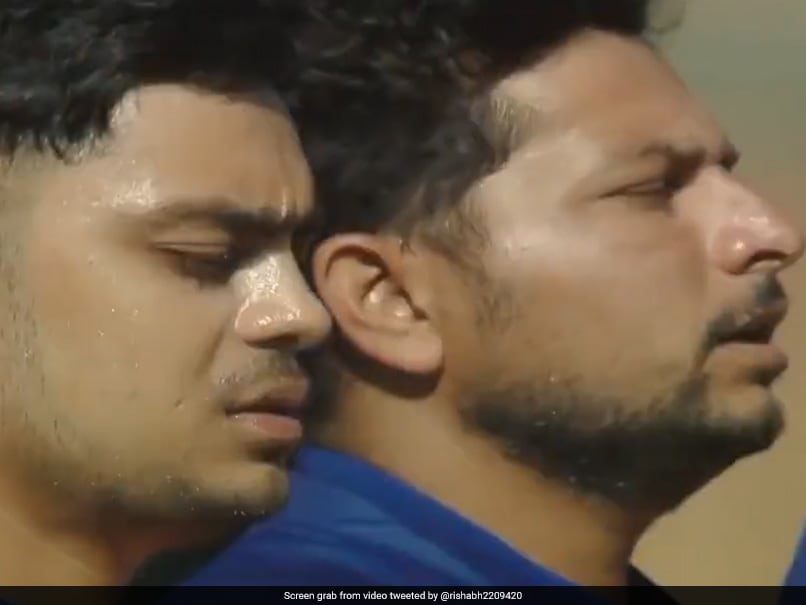 The KL Rahul-led Indian cricket team had a great day at the Harare Sports Club on Thursday as they beat Zimbabwe by 10 wickets in the first ODI of the three-match series.  Opening batters Shubman Gill (82) and Shikhar Dhawan Gill (81) were unbeaten as the tourists knocked off a modest target of 190 with 19.1 overs to spare. The home side were all out for 189 in 40.3 overs, thanks largely to a brave 70-run ninth-wicket stand between Richard Ngarava and Brad Evans.

Ahead of the match, there was a funny incident when the two teams were out on the field for their respective national anthems. India star Ishan Kishan looked annoyed as an insect flew close to his face. Kishan looked perplexed and even looked towards Kuldeep Yadav by his side.

Talking about the match, Zimbabwe used eight bowlers, but none could claim a wicket as the Indian openers struck a six and 19 fours between them. Ngarava fared worst with the ball, conceding 40 runs in seven overs, while Luke Jongwe restricted the Indian openers to 11 runs in his two-over stint.

India, third in the ODI rankings and 10 places above Zimbabwe, travelled to southern Africa without several stars, including Virat Kohli and Rohit Sharma, who are resting.

Head coach Rahul Dravid also took a break after matches in England and the Caribbean with VVS Laxman taking charge.

In trouble at 83-6 after being put in to bat by India, the home side rallied with Ngarava scoring 34 and Evans unbeaten on 33. Ngarava faced 42 deliveries and smashed a six and three fours before being clean bowled by Prasidh Krishna.

Evans also struck a six and three fours, off 29 balls, as Zimbabwe sought in vain to extend a run of nine victories in 11 matches since Dave Houghton became coach in June.

Former batting star Houghton inherited a team demoralised after 3-0 ODI and T20 whitewashes by Afghanistan and led Zimbabwe to series triumphs over Bangladesh in both white-ball formats.

The other Zimbabwe batsman to impress was Chakabva, whose 35 runs included four fours.

Although Krishna was the most expensive, conceding 50 runs, he claimed the prized wicket of Zimbabwe middle-order star Sikandar Raza.

Pakistan-born Raza, who scored unbeaten centuries in two of his three ODI innings against Bangladesh, had scored just 12 when he was caught by Dhawan in the slips.

Kuldeep Yadav Zimbabwe vs India 2022 Cricket
Get the latest updates on India vs South Africa and check out  Schedule, Results and Live Score. Like us on Facebook or follow us on Twitter for more sports updates. You can also download the NDTV Cricket app for Android or iOS.