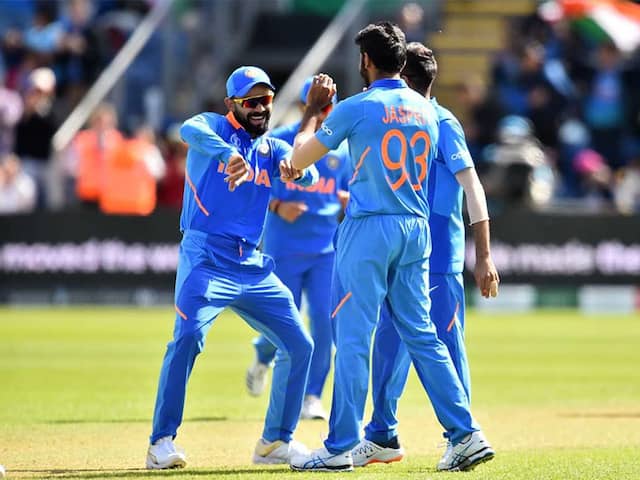 India beat Bangladesh by 95 runs in their last warm-up game before the World Cup. Liton Das and Soumya Sarkar gave Bangladesh a solid start as they added 49 runs for the first wicket. Jasprit Bumrah dismissed two batsmen in two balls to pull things off. Mushfiqur Rahim and Liton Das added 120 runs for the fourth wicket and kept Bangladesh in the hunt. Mounting run-rate forced, Das to go after the bowler and he got out to Yuzvendra Chahal at 73 runs. Mohammad Mithun also fell on the very next ball, putting Bangladesh chase in jeopardy. Mushfiqur kept going as the lone warrior but didn't get the necessary support from the other end. Ultimately, he also departed in the 40th over after scoring 90 runs. From there Indian spinners picked up wickets at regular interval and ultimately sealed the game in their side's favour. For India, the spin duo of Yuzvendra Chahal and Kuldeep Yadav picked three wickets apiece. Earlier, Bangladesh skipper Mashrafe Mortaza won the toss and opted to bowl. The start of the match was delayed due to slight drizzle. The rain once again kicked in, after just two balls, forcing the players to leave the ground. After the play resumed, Shikhar Dhawan fell cheaply. Rohit Sharma (19 off 42) and Virat Kohli (47 off 46 balls) started slow but steadied the innings. Rohit fell in the 14th over while Kohli got out to a brilliant yorker of Mohammad Saifuddin. Vijay Shankar, who was making a comeback after sitting out in the last match due to an injury, also couldn't make most of the opportunity and departed quickly. KL Rahul and MS Dhoni, thereafter, stitched a partnership of 164 runs to bring India back in the game. Rahul scored a century and solved India's No. 4 quandary ahead of the World Cup. After his departure, Dhoni took the charge and helped India cross 300. He got a good support from Hardik Pandya who scored 21 off 11 deliveries. Ravindra Jadeja, who came to bat in the last over, made quick-fire 11 off 4 balls to help India finish the innings at 359/7. (SCORECARD)

Shakib Al Hasan World Cup 2019 Live Score Live Cricket Score Live Blogs Cricket
Get the latest Cricket news, check out the India cricket schedule, Cricket live score . Like us on Facebook or follow us on Twitter for more sports updates. You can also download the NDTV Cricket app for Android or iOS.