The ghosts of the 2015 World Cup semi-final loss once again came to haunt South Africa as New Zealand yet again finished on the winning side, having chased a target of 242. 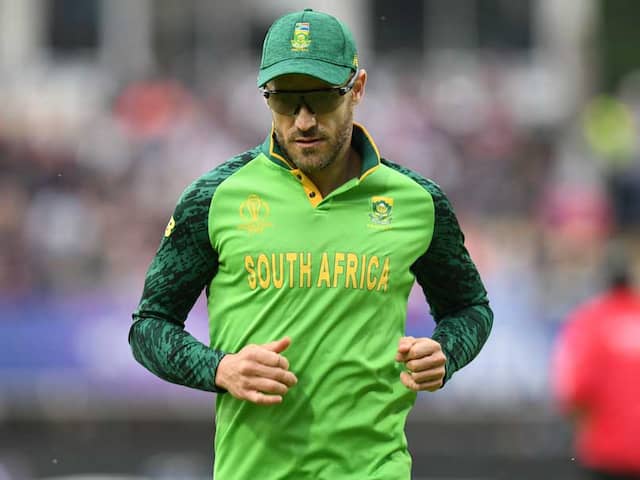 Faf du Plessis admits that atmosphere in the dressing room is upsetting.© AFP

South Africa skipper Faf du Plessis, after suffering four losses out of their six outings (one match abandoned), feels that he has turned five years older. The captain said that atmosphere in the dressing room is upsetting as it has become tough to seal semi-final berth from this point. Disappointed after South Africa's loss to New Zealand in a nail-biting World Cup encounter, Faf du Plessis conceded that his team gave its all and fought till the end, even though the result didn't come their way.

On Wednesday, the ghosts of the 2015 World Cup semi-final once again came to haunt South Africa as New Zealand yet again finished on the winning side, chasing a target of 242.

Skipper Kane Williamson led from the front and showed nerves of steel with a masterful unbeaten hundred as he guided his team to a four-wicket win and took them to the top of the points table.

Williamson remained not out on 106 off 138 balls, his innings decorated with nine fours and a six, as the Kiwis saw off stiff resistance from South Africa to win with three balls to spare.

Colin de Grandhomme supported Williamson well with a gutsy 47-ball 60 which was studded with five fours and two sixes.

"You know, it's tough now. Like you can feel in the dressing room, the guys are hurting. I'm feeling five years older. My body is really sore after that," Faf said at the post-match presser.

"So we left everything out there, and that's all I can ask for as a captain, that the guys fought. They showed that."

South Africa were sloppy in the field and the chances they missed eventually cost them the game at Edgbaston.

In Imran Tahir's 38th over, South Africa handed Williamson and de Grandhomme a reprieve each, letting their much-win match slip away. While David Miller missed a couple of tough chances -- one each against Williamson and Grandhomme in Tahir's over, the Proteas failed to notice a faint edge off Williamson's bat in the final ball of the over to Quinton de Kock. South Africa did not request a review, only for replays to show a nick.

"We weren't aware of it. I think I was at long on at the time, and Quinny is the closest to the action. He's always my go to man," du Plessis said, when asked about the reprieve.

"I just thought it was a plain miss. I just heard about it now at the post match that he said he had a nick on it. But even Kane said he didn't know he had to fine tune it. He would have referred it. But that's not where the game was won and lost."

He acknowledged that it was his batter's poor performance, especially the seniors including himself, was the main reason for South Africa's dismal performance in this edition of the showpiece event so far.

"It's just pure numbers on the board. Batters getting the runs that they should. If you look at opposition, there have been big runs scored by batting lineups, you know. We've got a pretty youngish batting lineup if you take Rassie (van der Dussen), Aiden (Markram), guys like that, even Andile to a degree. He's going really good at his cricket, but he's young in terms of putting innings together," said du Plessis.

"So if you compare our battle line-up, especially our batting lineup to other line-ups around the world, purely on a numbers point of view, that doesn't stack up with the rest of the world in terms of numbers. So we're not as experienced perhaps as other teams when it comes to that, but, yeah, the reason why I say not as good as other teams is we're just not producing scores or innings that can win you games," he added.

This was South Africa's fourth loss in six games, having three points and being in eighth position in the 10-team table. They are all but out of the competition. They can still make it to the last four but it would take an extraordinary combination of results to see them into the semi-finals from a 10-team round-robin group phase.

South Africa will next face Pakistan on Sunday at Lord's in London.

Faf du Plessis World Cup 2019 New Zealand vs South Africa, Match 25 Cricket
Get the latest Cricket news, check out the India cricket schedule, Cricket live score . Like us on Facebook or follow us on Twitter for more sports updates. You can also download the NDTV Cricket app for Android or iOS.