New Zealand and Pakistan are playing an important World Cup 2019 match at Edgbaston on Wednesday. 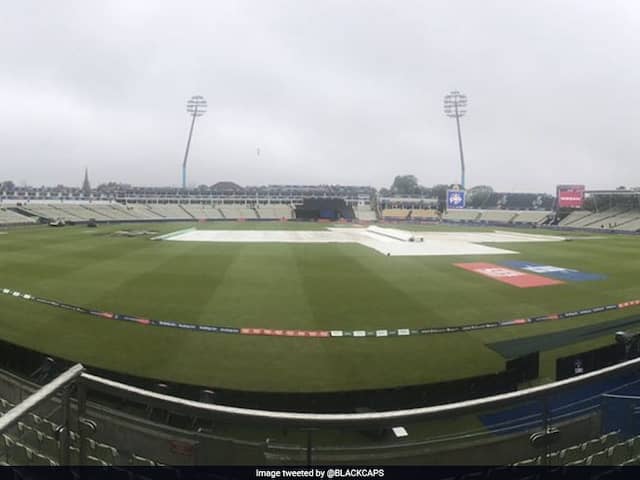 Overnight rain had left the outfield wet in Birmingham.© AFP

New Zealand are just one win away from a World Cup 2019 semi-final berth but the rain gods have decided to keep them waiting as the toss for their match against Pakistan has been delayed due to wet outfield in Birmingham. The Birmingham weather forecast suggests cloudy skies throughout the day with rain expected to intervene at regular intervals. The umpires, after inspecting the pitch, said the toss will happen at 3:30 pm IST (11 am local time) and the match at 4 pm IST (11:30 am local time) with no loss of overs.

Earlier, the scheduled 2:30 pm IST (10 am local time) toss was put back after an early inspection by on-field umpires Paul Reiffel and Bruce Oxenford of Australia.

Overnight rain had left the outfield wet and there was an inspection before taking a decision on when to start the match.

Unbeaten New Zealand are second on the 10-team table with 11 points, winning five matches and one no-result while Pakistan are seventh with two wins, three defeats and a no-result.

Pakistan have faced several ups and downs in World Cup 2019 so far. They thumped tournament favourites England and South Africa while they were outclassed by India, Australia and the West Indies.

If Pakistan want to seal the semi-final berth, they will have to win all the remaining matches and will also have to keep an eye on other matches.

On the other hand, New Zealand's golden run in World Cup 2019 is on and they are on the verge of becoming the second team after Australia to seal their spot in World Cup 2019 semi-finals. A win over Pakistan will send them into the knockouts.

Sarfaraz Ahmed World Cup 2019 Cricket New Zealand vs Pakistan, Match 33
Get the latest Cricket news, check out the India cricket schedule, Cricket live score . Like us on Facebook or follow us on Twitter for more sports updates. You can also download the NDTV Cricket app for Android or iOS.