MS Dhoni was heavily criticised for his slow innings against England and Afghanistan in the World Cup 2019. 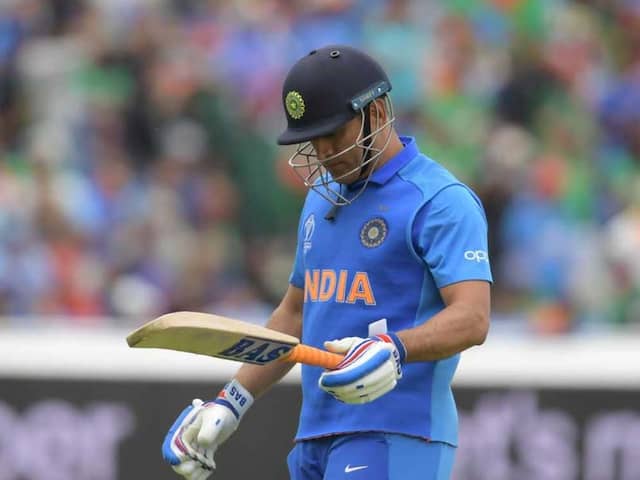 MS Dhoni has been facing a lot of flak for his slow batting in the ongoing World Cup 2019. Dhoni's approach on sluggish wickets has led to a lot of criticism from various cricket experts. There have been reports going around that the former India captain will bid adieu to international cricket after India's last World Cup 2019 game. However, Sri Lanka's fast bowler Lasith Malinga feels that Dhoni should continue for another couple of years. The 35-year-old Malinga said that MS Dhoni is still the best finisher in world cricket and the youngsters can benefit from his experience.

"He should play another year or two and prepare players who can do the job of finishers on the big stage. He is still the best finisher in world cricket. It will be difficult to fill his shoes and the young players should look to learn from him," Malinga was quoted as saying by IANS.

Malinga also lavished praise on his Mumbai Indians teammate Jasprit Bumrah, who has been the star with the ball for Team India. Bumrah has managed to pick 14 wickets in eight matches so far in the tournament.

Talking about Bumrah's rise in international cricket, Malinga said that the best part about the India pacer is his belief in his ability, which helps him beat the pressure of performing on the big stage.

"What is pressure? Pressure means you don't have the skill. If you have the skill, there is no pressure. It is all about skill and accuracy and if you are accurate, you know you can do what you aim to. He is a skillful bowler and knows he can bowl same balls one after the other."

"The thing is anyone can bowl yorkers, slower balls and good length balls. But the idea is to have the accuracy. How many times can you hit the same spot? Then comes analysing the game. The handling of situation is what counts, and then comes the application," Malinga explained.

Malinga who has played alongside Jasprit Bumrah for the Mumbai Indians in IPL elucidated that Bumrah's hunger to learn makes his a good player.

"I saw him (Bumrah) in 2013 and spent time with him. He was hungry to learn, and he learnt quickly. Hunger to learn is very important. Jasprit has shown the character in a short period," Malinga said.

Malinga believes that this Indian team can repeat the feat that the team under MS Dhoni achieved at the 2011 World Cup.

"I think this team can do it as they have shown character. They have experienced players and you know how well Rohit Sharma is playing. Virat Kohli is also due and he might score his first hundred in the semi-final or the final as he loves the big stage. The Indians have a lot of match-winning players and that is what counts," the Sri Lankan ace pointed out.

Commenting on his personal journey and how he plans to go ahead after the World Cup, Malinga said: "I just want to meet the board and ask them what they expect of me and I will plan accordingly. For the World T20 in 2020, we have to play the qualifying round and that has to be kept in mind."

India Cricket Team Cricket World Cup 2019
Get the latest Cricket news, check out the India cricket schedule, Cricket live score . Like us on Facebook or follow us on Twitter for more sports updates. You can also download the NDTV Cricket app for Android or iOS.