Virat Kohli had urged the Indian fans not to boo Steve Smith but applaud him instead, during the World Cup 2019 league match. 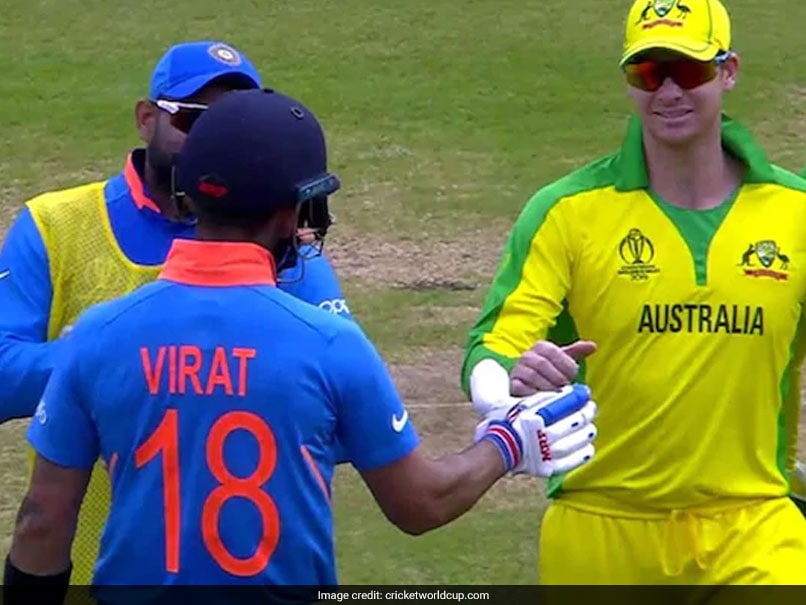 Virat Kohli's gesture towards Steve Smith was praised across the cricketing fraternity.© Twitter

Virat Kohli came to Steve Smith's defence when Indian fans turned on the former Australian captain during the India vs Australia World Cup 2019 at The Oval in London. The Indian skipper asked the fans to lay off Steve Smithwhen he thought the abuse against the Australian got too much. But England captain Eoin Morgan has made it clear, he would do nothing of the sort when the hosts clash with Australia at Lord's on Tuesday. Morgan insisted it is not his job to tell supporters how to react to David Warner and Steve Smith.

Warner and Smith were banned for 12 months for their role in the infamous ball-tampering scandal in South Africa. Ever since their arrival in England for the World Cup, the duo have been on the receiving end of boos and abuse from fans.

Australia coach Justin Langer has pleaded for the taunts to stop, with India captain Virat Kohli and Pakistan skipper Sarfaraz Ahmed telling their supporters to lay off the duo.

But although the Australia clash is being played at Lord's -- the 'home of cricket' where crowds are traditionally polite -- Morgan refused to issue a plea to respect Warner and Smith.

"I'm not expecting anything. I think fans and supporters up and down the country will have different reactions, as they will around the world. So we'll see," Morgan told reporters on Monday.

"Supporters pay a lot of money, they do. And sport is beautiful in many ways, because it attracts people from far and wide.

"And you often see crowds offering support to both sets of players in the grounds."

Morgan added: "You don't know how sports fans will react.

"Just because two guys have been punished, served their punishment and returned to play, it doesn't mean they will be accepted back into the cricket community straight away. It will take time."

Asked for his opinion of Bairstow's comments, Morgan said: "I don't have a view on it. I think every instance is different, every team is different.

"I believe that was a long time ago under a different regime. I don't know."

Defeats by Sri Lanka and Pakistan mean England could need to win two of their three remaining group matches against Australia, India and New Zealand to reach the semi-finals.

But Morgan tried to play down the significance of the latest clash with their old enemies by saying: "It's not must-win yet. We don't need to win every game to get to the semi-final."

Eoin Morgan World Cup 2019 Cricket England vs Australia, Match 32
Get the latest updates on ICC Women's Cricket World Cup 2022 and IPL 2022, check out the Schedule , Live Score and IPL Points Table. Like us on Facebook or follow us on Twitter for more sports updates. You can also download the NDTV Cricket app for Android or iOS.