Hundreds of children flooded across the outfield at the Oval -- across town from Lord's -- to help Eoin Morgan's men celebrate their historic triumph. 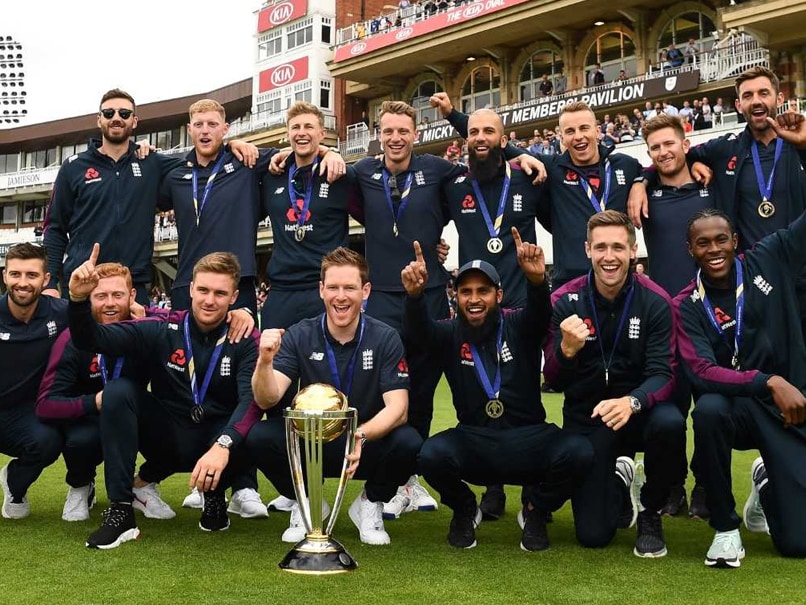 England revelled in their first World Cup triumph on Monday, soaking up the adulation of a disbelieving nation after one of the most extraordinary finishes to a cricket match in history. The host country, after 44 years of trying, finally became world champions with a stunning victory over New Zealand at Lord's, triumphing on superior boundary count after both the match and the additional Super Over shootout ended with the scores level. The game was watched by the biggest audience in a generation, with around 30,000 packed into Lord's, thousands congregating in front of a big screen in Trafalgar Square in central London and the first free-to-air terrestrial coverage in 14 years.

Hundreds of children flooded across the outfield at the Oval -- across town from Lord's -- to help Eoin Morgan's men celebrate their historic triumph.

The south London ground was where England launched their World Cup campaign with a victory over South Africa way back on May 30.

Later, the players were due to go to a reception hosted by outgoing Prime Minister Theresa May at Downing Street.

Many of the young children at the Oval were wearing the kit of the All Stars junior programme run by the England and Wales Cricket Board and others were dressed in their school uniforms.

As 'Happy' by Pharrell Williams blared out, the youngsters were delighted to catch sight of England stars such as Ben Stokes, Jos Buttler and Jofra Archer and flocked towards their new heroes.

It was a more modest celebration than the open-topped bus parade through the streets of London for England's 2005 Ashes victors but was in keeping with the push to sell the game to a new generation.

"I don't know if it's sunk in yet but coming down here and seeing what a small portion of the support we've had feels about it, the kids, the adults, the energy they all had for what they saw yesterday is amazing," said man-of-the-match Stokes.

England coach Trevor Bayliss, drafted in with the aim of winning the World Cup following their miserable first-round exit at the 2015 tournament, said, "I heard some of the young guys in the team say the 2005 Ashes inspired them to bigger and better things.

"I think they are very proud they've been put in a position where they can hopefully inspire a few of the next generation."

On Sunday the Queen sent her congratulations to England and the Royal Mail postal service announced it would issue a series of special stamps and decorate 15 post boxes to celebrate both the World Cup win and England's victory at the 2017 Women's edition of the tournament.

Prime Minister May, a lifelong cricket fan, was due to host the team at a reception.

"Yesterday (Sunday) was a brilliant performance by a brilliant team," said May. "They showed flair, courage and an absolute determination to become world champions.

"The achievement, delivered in such a thrilling style on home soil, will live forever in our sporting history."

"It's also exciting to think just how many children will be inspired by this victory to pick up a bat for the first time and hopefully become the great cricketers and World Cup winners of tomorrow," she added.

"We must build on this success."

New Zealand Cricket Team World Cup 2019 Cricket
Get the latest updates on ICC T20 Worldcup 2022 and CWG 2022 check out the Schedule, Live Score and Medals Tally. Like us on Facebook or follow us on Twitter for more sports updates. You can also download the NDTV Cricket app for Android or iOS.