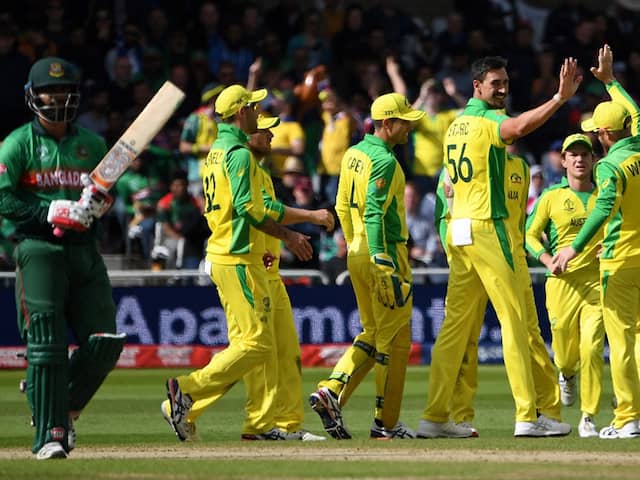 AUS vs BAN Highlights, World Cup Match: Australia got over the line against a spirited Bangladesh.© AFP

Australia defeated Bangladesh by 48 runs in their World Cup league match at Trent Bridge on Thursday to go top of the 10-team table. Riding on David Warner's magnificent innings of 166, Australia posted a huge total of 381/5 in their 50 overs. For Bangladesh, Soumya Sarkar was the pick of the bowlers who managed to pick up three wickets. During the cahse, Tamim Iqbal and Mahmuddlah scored half-centuries and Mushfiqur Rahim scored a fighting hundred but at the end, 382 proved to be too much for Bangladesh. Marcus Stoinis, Mitchell Starc and Nathan Coulter-Nile all picked up two wickets each. With the loss, Bangladesh remain fifth in the table, with the top four sides qualifying for next month's semi-finals.  (SCORECARD)

Trent Bridge, Nottingham World Cup 2019 Cricket Australia vs Bangladesh, Match 26 Live Score Live Cricket Score Live Blogs
Get the latest Cricket news, check out the India cricket schedule, Cricket live score . Like us on Facebook or follow us on Twitter for more sports updates. You can also download the NDTV Cricket app for Android or iOS.