Women's World Cup: India had defeated Sri Lanka in their last group game on Saturday, which was followed by a semi-final washout against England on Thursday. 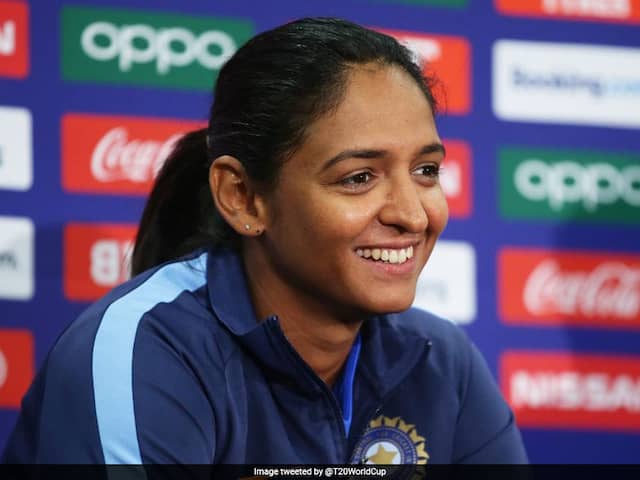 Harmanpreet Kaur conceded her team has been "restless" having last played on February 29.© Twitter

A forced eight-day break has affected India's preparations going into the Women's T20 World Cup final on Sunday but the team is ready to rise to the occasion in front a record crowd at the Melbourne Cricket Ground (MCG), skipper Harmanpreet Kaur said. An unbeaten run in the group stage propelled India to their maiden Women' T20 World Cup final after their last-four clash against England was washed out on Thursday. India had defeated Sri Lanka in their last group game on Saturday, which was followed by a semi-final washout on Thursday and Harmanpreet conceded her team has been "restless".

"We haven't been outdoors much and we didn't manage to play the important game against England," said Harmanpreet Kaur on the eve of the final against record four-time champions Australia.

"We were all in touch and doing indoor training, but it doesn't give you full confidence because the surface is totally different. Everyone was in good touch and thinking what they can do for the team."

"We did get rest also because when you're playing for a long time, you need a break. No-one wanted to take rest, everyone was so keen, everyone was on the ground and ready to deal with the situation."

Over 75,000 tickets have been sold for the finals and Harmanpreet said her team will look to enjoy the big stage and play positive cricket.

"It's a great feeling. It's the first time we're going to see 90,000 people in the stadium and we're really looking positive for that," said Harmanpreet.

"We are used to playing when a lot of crowd is around us. Sometimes there's no noise going around in the stadium so we need to keep an eye on each of us. It's a big moment.

"Rather than thinking about what is going to trouble us, it's only about being there, enjoying the moment and giving our best."

India had defeated Australia by 17 runs in the opening match of the tournament but Harmanpreet said it would be a fresh start for the two teams.

"One thing, we have to keep in mind Sunday is a fresh day, a fresh start. We have to start from ball one," he said. "We've done quite well in the league games. Both teams are under pressure and both are capable of winning."

Australia Women Harmanpreet Kaur Women's T20 World Cup India Women vs Australia Women, Final Cricket
Get the latest Cricket news, check out the India cricket schedule, Cricket live score . Like us on Facebook or follow us on Twitter for more sports updates. You can also download the NDTV Cricket app for Android or iOS.