With India all set to take on West Indies in the third ODI, Dhawan, along with Kohli, Yuvraj and Pandya spent some time in gym. 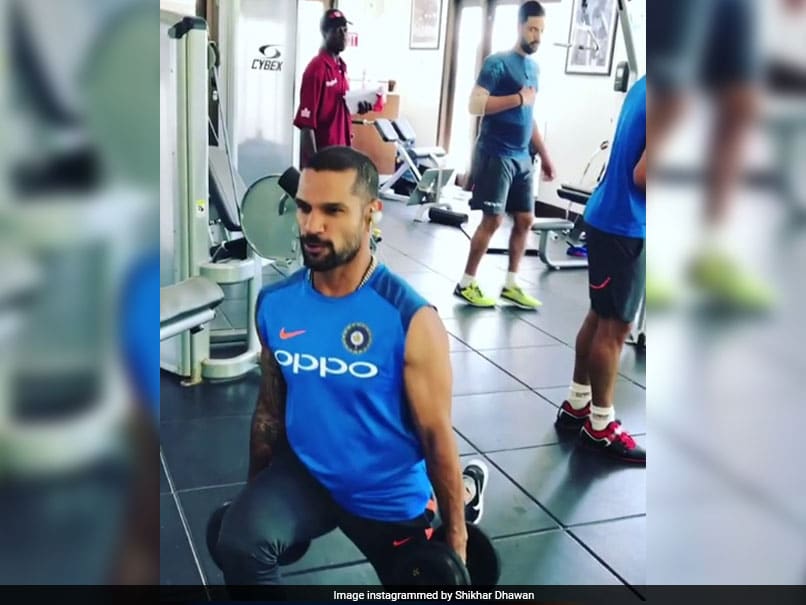 It is not a surprise that Virat Kohli wants his team to be the fittest in the world.© Shikhar Dhawan/Instagram.

With India all set to take on the West Indies in the third one-day international at North Sound, Antigua, on Friday, opener Shikhar Dhawan, along with skipper Virat Kohli, Yuvraj Singh and Hardik Pandya spent some time in gym. It is not a surprise that Kohli wants his team to be the fittest in the world. The Indian skipper also wants his team to be in top shape.

Dhawan, who has been in sublime form, recently uploaded a video on his Instagram account captioned, "Off day or not, training is alwys on with fun !!

Off day or not , training is alwys on with fun !!

The video shows Dhawan working out and lifting the weights during the fitness session, while Kohli seeking some advice from Shanker Basu, the fitness trainer of the India national team.

Indian all-rounder Pandya also posted a photo on his Instagram account and captioned: "Gym culture at its best with the team. What an atmosphere for the fitness aficionados. @imbhuvi @shikhardofficial @kedarjadhavofficial."

Gym culture at its best with the team. What an atmosphere for the fitness aficionados. @imbhuvi @shikhardofficial @kedarjadhavofficial

The Kohli-led Team India is presently playing a five-match series against West Indies.

After the opening match was abandoned due to heavy downpour, India produced a strong all-round performance to thrash West Indies by 105 runs in the second ODI at the Queen's Park Oval Stadium on Sunday.

The match was reduced to 43 overs a side due to a long spell of rain.

Asked to bat first, a century by opener Ajinkya Rahane and half-centuries by skipper Kohli and Dhawan helped India post a challenging total of 310/5.

In reply, the hosts could only manage 205/6 in their allotted 43 overs.

Apart from five ODIs, the Men in Blue will also play a T20I on the tour.

Comments
Topics mentioned in this article
India Cricket Team West Indies Cricket Team West Indies vs India 2017 Cricket Virat Kohli Hardik Pandya Yuvraj Singh Shikhar Dhawan
Get the latest updates on IPL 2020, check out the IPL Schedule for 2020 and Indian Premier League (IPL) Cricket live score . Like us on Facebook or follow us on Twitter for more sports updates. You can also download the NDTV Cricket app for Android or iOS.