Serena Williams became the oldest Open Era women's winner in US Open history, 293 days older than Margaret Court when she set the prior mark in 1973. 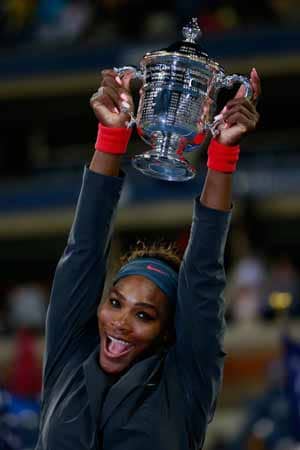 World number one Serena Williams captured her fifth US Open title, and second in a row, by outlasting second-ranked Victoria Azarenka 7-5, 6-7 (6/8), 6-1 Sunday to claim her 17th career Grand Slam crown.

The 31-year-old American became the oldest Open Era women's winner in US Open history, 293 days older than Margaret Court when she set the prior mark in 1973, and the third-oldest Grand Slam women's champion of the Open Era. (Also read: Tearful Azarenka vows to bury bleak Serena record)

Williams won $3.6 million, including a $1 million bonus for her success in US open tuneup events. (Also see: Match in pics)

She is the first top-seeded champion since Justine Henin in 2007 and the first woman to defend the US Open crown since Kim Clijsters in 2010.

Williams won a rematch of last year's US Open final that gave her and Azarenka a combined total of six of the eight major titles from the past two years.

Williams improved to 13-3 in their rivalry but two-time Australian Open champion Azarenka had won two of the previous three, most recently in last month's Cincinnati final.

"It was never over until match point," said Williams, who was broken twice in the second set when serving for the match.

"Victoria is such a great competitor. She was really able to push me into a third set. I was really stern with myself. I knew that if I wanted to win, I had to play better."

Azarenka admitted Williams was the superior performer in windy conditions at Arthur Ashe Stadium that baffled both players at times and sent Williams' pink dress fluttering above her waist much of the match.

"It's a tough loss but being in the final against the best player, who deserves the win, it's incredible," Azarenka said. "I gave it everything I had. I fought hard."

Graf has the Open Era record of 22 while Australian Court owns the all-time mark of 24, although Williams has matched the men's Slam record title total of 17 won by Roger Federer.

"I haven't taken any of it in yet. I feel like it's deuce right now," Williams said 45 minutes after the match. "I feel like a zombie. I feel like there's another match."

Williams became the first woman since Henin in 2007 to win the US and French Opens in the same year.

With the victory, Williams has won more than $9 million in 2013, a one-year women's record, and boosted her career winnings above $50 million as well as capturing her ninth title of the year, a one-season personal best.

She also has 55 career titles in total.

Serena Williams, who lost only 16 games over her first six matches, battled windy conditions and a determined foe in a rematch of last year's final to add to the New York hardcourt trophy haul that included wins in 1999, 2002, 2008 and 2012.

Williams said her Slam triumphs mean more after suffering blood clots in her lungs in 2011 that jeopardized her life and left her at times "lying in bed and thinking I will never play again.

"It's definitely sweeter," she said. "When I was 17 and won my first time I was really happy. Yet there were times I thought I would never pick up a racquet again so every one feels greater."

Williams seized a 4-1 lead in the second set but Azarenka broke her twice as she served for the match, later admitting she had lost focus "completely", and took her into a tie-breaker.

After being twice denied on set points by Williams, Azarenka swatted a service winner to lead 7-6 and Williams sent a forehand long to put herself into a third set.

"I was really disappointed," Williams said. "I felt like I had some chances. I didn't play a smart match in that second set. When I was up I didn't play like I could have and I should have."

Azarenka owned the momentum entering the final set but double faulted away a break to Williams, who promply fired three aces in the fifth game to hold for a 4-1 lead, one of them the fastest of the tournament by anyone at 126 mph.

When Azarenka netted a baseline forehand to surrender a break, Serena Williams had her third chance to serve for the title.

This time, she did not fail.

Comments
Topics mentioned in this article Victoria Azarenka Leander Paes Sania Mirza Maria Sharapova US Open 2013 Tiger Woods Tennis
Get the latest Indian Premier League 2020 news, check out the IPL 2020 schedule, Cricket live score . Like us on Facebook or follow us on Twitter for more IPL 2020 updates. You can also download the NDTV Cricket app for Android or iOS.
Related Articles

Coronavirus: Pat Cummins Says "Everyone Is Still Really Keen For IPL To Go Ahead"