For the second year in succession, the 24-year-old world number two came up short in the US Open final against the veteran American, losing another three-setter in the longest women's final in more than 30 years. 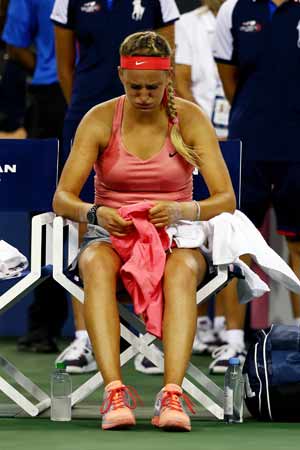 Victoria Azarenka insists she can topple Serena Williams from her perch despite slumping to an eighth defeat in eight Grand Slam meetings against the 17-time major champion.

For the second year in succession, the 24-year-old world number two came up short in the US Open final against the veteran American, losing another three-setter in the longest women's final in more than 30 years. (Also read: Azarenka backing 'naked' Nadal vs Djokovic)

The defeat took her career record against the world number one to 13-3.

But Azarenka was trying to take the smallest comfort from those statistics with two of those wins coming in 2013 in the Doha and Cincinnati finals after a four-year drought.

"I don't think there was much of a difference today or Cincinnati. I think the quality of the game and the quality of determination was the same," said the Belarusian after her 7-5, 6-7 (6/8), 6-1 loss. (Also see: Match in pics)

"I think overall the match from last year is a different story. It showed maybe not a different Serena, but it showed a different me as a player. And I felt that way.

"So I think that it's important to just try to go for those chances. I can't wait for the next chance."

Azarenka is not alone in her futile attempts to make a significant breakthrough against Williams.

Maria Sharapova, the world number three, has only beaten the American twice in 16 meetings, with both those wins coming back in 2004 while fourth-ranked Agnieszka Radwanska has a 6-0 losing record.

The Pole has taken just one set off Williams in all of those matches.

"I think it's incredible what she's achieving. She's playing definitely her best tennis right now. It really shows how focused and how composed and how much she can raise the level," added Azarenka.

"That's just really exciting for now, to be able to compete against that type of player who can be the greatest of all time, and I'm playing against that person in the finals of the Grand Slam."

Adding to the problems facing Azarenka and the rest of the women, most of them slender and lightweight, who are trying to chase down Williams is the American's awesome physical power.

Williams, 31 and seven years Azarenka's senior, fired down the fastest serve of the women's tournament of 126mph (202.7kmh) in the final.

"I'm going to try and improve that particular aspect, because the gap between Serena's serve and my serve is pretty big," admitted the double Australian Open champion.

"But I don't want to compare that because I think she has the best serve of all time.

Azarenka remains defiant over her future opportunities at the majors.

"I'm just gonna go back out and work my ass off, to go and fight hard again, to put myself in this opportunity again."

Comments
Topics mentioned in this article
Victoria Azarenka Leander Paes Maria Sharapova Sania Mirza US Open 2013 Tiger Woods Tennis
Get the latest updates on Olympics 2020, Olympics 2020 Medal Tally, Live Cricket Score . Like us on Facebook or follow us on Twitter for more sports updates. You can also download the NDTV Cricket app for Android or iOS.