Serena turned her fantasy into reality by winning the 1999 US Open at age 17 and 14 years later, she has claimed her 17th Grand Slam crown and a fifth US Open title, beating second-ranked Victoria Azarenka. 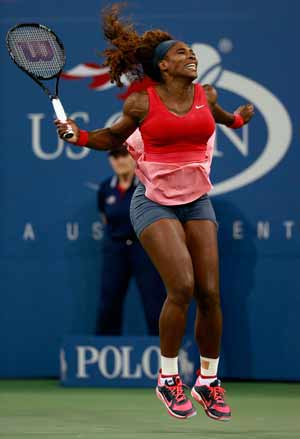 Serena Williams started playing tennis on the public courts in suburban Los Angeles at age five with her sister Venus, both of them dreaming of someday becoming a Grand Slam champion.

"I am still just that girl with the racquet and a dream and I'm just playing for that," said Williams, who became the oldest women's singles champion in the Open Era in New York by taking the trophy 18 days shy of her 32nd birthday. (Also see: Serena vs Azarenka, in pics)

World number one Williams won her second French Open title this year, 11 years after her only other, and already has five Wimbledon and five Australian Open titles in her career.

Sunday's win put her one Grand Slam crown shy of matching Chris Evert and Martina Navratilova on the all-time Slam singles title list with 18, four shy of Steffi Graf's 22 crowns with Australian Margaret Court atop the list on 24.

"I never really want to focus on the numbers," Williams said. "I started playing tennis not to be the greatest but just because I had a racquet and a dream. Now people are saying I could be (the greatest), but for me, I'm just not there yet.

"People like Chris Evert and Martina Navratilova and Steffi Graf, they are just, to me, the ultimate icons in the history of women's tennis."

But Williams has had her struggles. Serena's half-sister, Yetunde Price, was fatally shot 10 years ago at 31 -- the same age Serena is now -- by a gang member in their hometown of Compton. She had been Serena's personal assistant.

After Williams cut her foot at a German restaurant days following her 2010 Wimbledon triumph, she needed two surgeries and spent 20 weeks in a walking cast, a situation she blamed for causing blood clots in her lungs in 2011 with threatened her life. She missed three major events and was out almost a year.

"(Doctors) said I had clots in both lungs. A lot of people die from that because you don't recognise it," Williams said in 2011.

"I couldn't breathe, I honestly just thought I was out of shape. A couple more days and it would not have been good. It could have possibly been career-ending.

"Being at the top of your game, having to have something like that happen randomly was tough, and it really makes me appreciate things."

Helping keep the challenges fresh for Williams is Patrick Mouratoglou, who started working with her last year after a first-round French Open exit, helping her to the 2012 US Open title and this year's Roland Garros crown.

Now Williams sets performance targets for herself within matches.

"Just this tournament I started setting different goals for myself and it has been really working for me," she said. "I just started that and I'm enjoying it."

Williams credits her success to her coach and father, Richard Williams, and has stuck by him even after her parents split up.

"I wouldn't have won a single title without him and without his backing," said Williams. "He's a great coach. He's just so innovative.

"One of the reasons I'm still playing some of the best tennis at 30 is because he built my game and my sister's game. He gave us a good foundation. It was solid and it wasn't weak, so we were always able to grow our game."

Comments
Topics mentioned in this article
Tennis Tiger Woods US Open 2013 Maria Sharapova Sania Mirza Leander Paes Venus Williams Victoria Azarenka
Get the latest Cricket news, check out the India cricket schedule, Cricket live score . Like us on Facebook or follow us on Twitter for more sports updates. You can also download the NDTV Cricket app for Android or iOS.