Nadal has capped a year which has now seen him capture 10 titles and stretch his season winning record to 60 victories and just three losses. 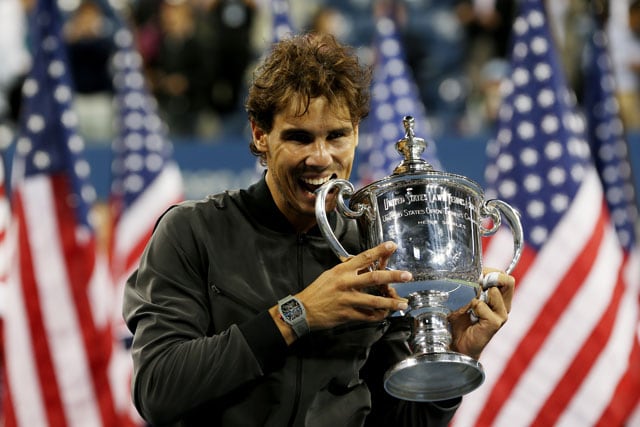 Rafael Nadal claimed his second US Open title and 13th Grand Slam crown on Monday when he defeated world number one Novak Djokovic, 6-2, 3-6, 6-4, 6-1 in a lung-busting, big-hitting final.

Nadal, 27, added the 2013 trophy to his 2010 triumph, when he completed a career Grand Slam, and gloriously capped a year that has now seen him capture 10 titles and stretch his season record to 60 wins and just three losses. (Nadal vs Djokovic, as it happened)

Monday's win also earned him a total of $3.6 million, which takes his career earnings through the $60 million mark and also edged him closer to Roger Federer's record of 17 majors and put him one behind Pete Sampras. (Related: Will taxmen eat into Nadal's prize-money?)

In the pair's record-setting 37th meeting, world number two Nadal, who only returned to the tour in February following a seven-month injury lay-off, took his lead over Djokovic to 22-15 as he added the US Open crown to the eighth French Open he claimed in June.

"It's very emotional. All my team knows what this means to me," said Nadal. (Also see: Match in pics)

"Novak always brings my game to the limit. He is an amazing player. He will go down as one of the greatest in the sport."

For Djokovic, playing in a fourth successive final in New York, it was a devastating defeat in a year which started with a fourth Australian Open title but was followed by a semi-final loss at the French Open to Nadal and a Wimbledon final mauling by Andy Murray. (Related read: How Djokovic plans to use defeat to create motivation)

For the neutrals, however, it was a memorable contest which showcased thrilling athleticism, delicate touch and exhausting, brutal rallies, one of which was fought out over 54 shots.

Djokovic lost 11 of the last 13 games with his challenge fatally undermined by 53 unforced errors to Nadal's 20.

"Rafa was too good, and he definitely deserved to win today. I am disappointed to lose a match like this but it's a huge privilege to be fighting for the trophy," said Djokovic.

Nadal, in his 18th major final, was comfortably the more settled player in the opening stages, finding pin-point accuracy while Djokovic, who had already voiced his dislike at playing on a late Monday afternoon, was sluggish and heavy-footed. 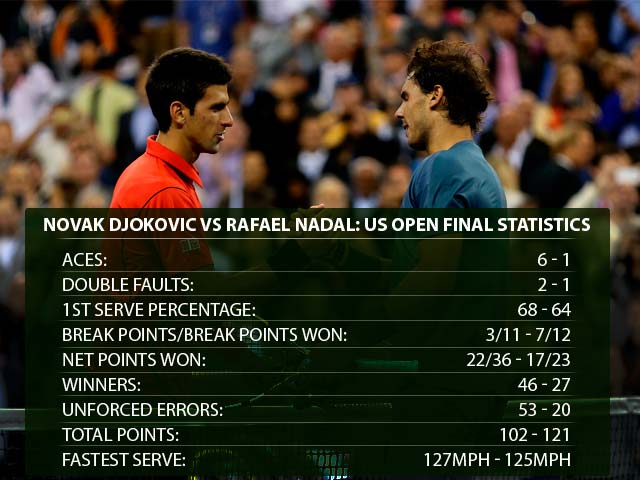 Nadal, who missed the 2012 tournament through injury, sensed the Serb's uneasiness and broke for a 2-1 lead, mastering the occasion as well as the tricky breeze.

Djokovic, meanwhile, looked as lethargic as he had done at Wimbledon when he was brushed aside in straight sets by Murray.

Even the technology was on the Spaniard's side as a successful challenge on triple break point gave him a double break for 5-2.

With a host of showbusiness glitterati looking on -- including Sean Connery, Leonardo DiCaprio, Jessica Alba and Justin Timberlake -- Nadal claimed the first set with ease after 42 minutes, Djokovic undone by 14 unforced errors.

The omens were looking good at that stage for the 27-year-old Spaniard, who had only lost three out of 154 career Grand Slam matches when winning the first set.

But 26-year-old Djokovic stormed out of his slumbers and broke for 4-2 in the second set after a 54-shot rally, Nadal dumping an approach into the net.

It was only the second time Nadal had dropped serve in the tournament and the setback fired him into an immediate response, hitting back at 3-4, before Djokovic broke again for 5-3 on a modest 28-shot exchange.

This time, the world number one backed up it up to level the final, taking the 58-minute set with a down the line winner.

Djokovic broke to love in the opening game of the third and had a point for a double break in the third before Nadal clung on to avoid dropping serve for the fourth game in a row.

The world number two then capitalized on a sloppy Djokovic service game to level at 3-3, but the twists and turns became a tumble for Nadal, who slipped to the floor in the ninth game. 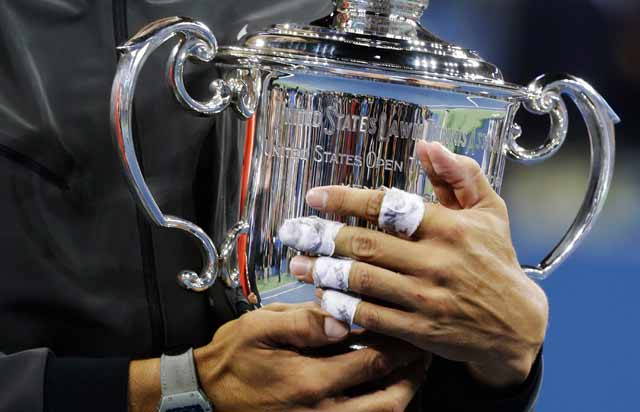 Unruffled, he saved three break points to sneak ahead 5-4 and then unleashed a deep, fierce forehand which Djokovic could only slap long as Nadal went into a two sets to one lead.

The momentum was back with Nadal as Djokovic cursed his unforced error count, which had rocketed to 42.

Nadal fought off two break points in the opening game of the fourth set and broke a tiring Djokovic with a heat-seeker of a forehand.

He backed it up for 3-0 and repeated it against a broken-spirited Djokovic for 5-1.

Victory was Nadal's after three hours and 21 minutes when Djokovic buried a return in the net.