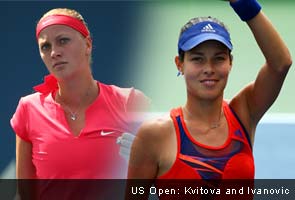 Grand Slam winners Petra Kvitova and Ana Ivanovic advanced to the second round of the US Open on Tuesday while Roger Federer and Novak Djokovic awaited their openers at Arthur Ashe Stadium.

"In the first round of Grand Slams it's difficult all the time so you have to be focused," Kvitova said. "I didn't play my game all the match. I didn't have focus. I have to have more confidence."

World number one Djokovic, a six-time Grand Slam champion who captured his fourth Australian Open crown earlier this year, launches his quest for a fourth consecutive US Open final when he faces Lithuanian Ricardas Berankis.

Seventh-seeded Swiss star Federer, at his lowest spot in the US Open order since 2002, will face Slovenia's Grega Zemlja in a match postponed from Monday due to rain.

Kvitova broke to open her match but was forced to save two break points in the next game by Doi, a 22-year-old left-hander from Chiba whose only prior US Open appearance ended with a 2011 first-round cramping retirement.

Doi broke Kvitova in the fourth game of the second set and, after missing four break-point chances in the eighth game, claimed the set by holding.

Doi netted a forehand to surrender a break that gave Kvitova a 2-0 lead in the third set. Doi earned a break chance in the third game but sent a backhand beyond the baseline and Kvitova held, then broke Doi with a forehand volley winner for a 4-0 lead.

Kvitova, who denied Doi on 14 of her first 15 break chances, netted a backhand to surrender a break in the fifth game but broke again and held for the match after one hour and 55 minutes with a forehand winner.

The US Open is the only Grand Slam event where Kvitova has not reached the semi-finals, her best runs being to the fourth round in 2012 and 2009.

Doi has never beaten a top-25 player, her 0-4 showing against top-10 foes including a loss to eventual runner-up Kvitova at Katowice in April, and Doi's best tour showing was a semi-final run last year at Osaka.

Kvitova is the highest-ranked rival in the quarter of the draw to second seed and two-time Australian Open champion Victoria Azarenka, who begins her quest for a return to the US Open final later against German Dinah Pfizenmaier.

Ivanovic, who could face Azarenka in the fourth round, needed only 58 minutes to advance, with American Varvara Lepchenko or Romanian Alexandra Dulgheru up next.

"I'm very pleased with my performance," Ivanovic said. "It was a bit of a shaky start. There were lots of breaks but I found my rhytthm and my game plan settled in."

Ivanovic reached the last eight at the US Open for the first time last year, her first Slam quarter-final since claiming the crown at Roland Garros.

Reigning Wimbledon champion Marion Bartoli, who retired two weeks ago, turned up in the US Open media center, launching her commentary career with a stop to visit with her new peer group.

On the women's side, Denmark's sixth-seeded Caroline Wozniacki, a 2011 US Open semi-finalist who was ousted last year in the first round, plays China's Duan Ying-Ying while Samantha Stosur, the Australian 11th seed who won the 2011 crown, launches her title bid against Victoria Duval.