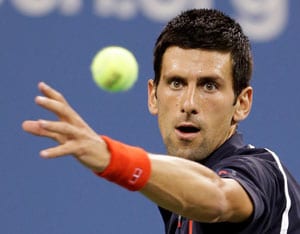 Contorting his body while sliding into shots, Novak Djokovic used his typical relentless defense to reach the U.S. Open semifinals for the seventh consecutive year.

Not quite as unflinchingly dominant as he was during his first four matches in the tournament, the top-seeded Djokovic quickly overcame a one-set lull Thursday night against 21st-seeded Mikhail Youzhny of Russia before finishing off a 6-3, 6-2, 3-6, 6-0 victory. (Also read: Murray ousted by Wawrinka in quarters)

Djokovic, the 2011 champion at Flushing Meadows, won the first 14 sets he played these two weeks, taking under two hours to advance each time. But he faltered against Youzhny in the third, when Djokovic made 16 unforced errors and got broken twice - the only service games Djokovic lost in their match.

While Wawrinka will making his major semifinal debut Saturday, Djokovic will be playing in the final four for the 14th Grand Slam tournament in a row. That's the second-longest streak in history, trailing only Roger Federer's record of 23.

That loss a year ago came against Murray, who also beat Djokovic in the Wimbledon final this July.

But Djokovic doesn't need to worry about that happening again.

Instead, the six-time major champion will face Wawrinka. Djokovic has won 12 of their 14 tour matches, including the last 11.

"It's going to be a very close match. I think there's not a clear favorite," Djokovic said. "He showed today why he deserves to be top 10 in the world."

Youzhny is one of the dozen active men who have reached the quarterfinals at each of the four Grand Slam tournaments at least once, and he made it as far as the semifinals at New York twice, in 2006 and 2010. But what he might be best known for are some of his on-court antics, including once bashing himself in the head with his racket hard enough to draw blood.

Coming off a draining five-set victory over 2001 U.S. Open champion Lleyton Hewitt in the fourth round, Youzhny started slowly Thursday.

He finally converted his eighth break chance, 100 minutes into the match, in a game that included a lunging retrieval of a drop volley. That gave him a 3-1 lead in the third set, and when he held serve to go up 4-1, Youzhny let out a guttural yell.

After Djokovic broke back to get within 4-3, he went through another letdown, and double-faulted to lose serve yet again. Youzhny steadied himself and served out the set.

But Djokovic did not permit the rest of his big lead to slip away, breaking in the second game of the fourth set to regain control at 2-0.

In what would turn out to be the last game, with Djokovic two points from victory, Youzhny hit a running backhand down the line for a winner and basked in the moment, raising his arms and enjoying the roar of the crowd. The shot was so nice that even Djokovic applauded.

But really, this was Djokovic's night.

He saved the first seven break points he faced, including one while trying to serve out the opening set. Then, on his third set point, a 14-stroke exchange, Djokovic flicked a desperation lob that Youzhny hammered with an overhead smash. Somehow, some way, Djokovic sprinted over for a stretching flick of a backhand that Youzhny netted.

Djokovic wheeled toward his box - British business magnate Richard Branson was among the supporters there - and flexed and pumped his arms while screaming.