US Open: 'Naked' Nadal has Azarenka's support against Djokovic

She may have lost her title match to Serena Williams but Victoria Azarenka has quite a unique reason to support Rafael Nadal in the men's final match. 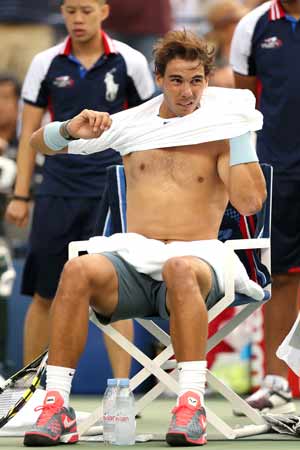 Beaten US Open finalist Victoria Azarenka will be backing Rafael Nadal to defeat Novak Djokovic in the men's title showdown on Monday after being seduced by the beefcake Spaniard's biceps.

Azarenka was asked which player she would be supporting in Monday's blockbuster final, the 37th meeting between the world's two top-ranked men. (Also read: Djokovic braced for Nadal's ultimate challenge)

"Rafa convinced me by practicing with his shirt off," said Azarenka, who on Sunday lost 7-5, 6-7 (6/8), 6-1 to Serena Williams in the women's championship match.

Williams opted not to select a favorite.

"It's tough to say anything against Nadal because he's been doing so well and he's lost like never this year," she joked of a player who's been defeated just three times in 62 matches since February.

"Djokovic, this is his fourth time in the final, and he has a good record against Rafael. It's going to be an interesting match."

Comments
Topics mentioned in this article
Tennis Tiger Woods US Open 2013 Sania Mirza Maria Sharapova Rafael Nadal Leander Paes Novak Djokovic Victoria Azarenka
Get the latest Cricket news, check out the India cricket schedule, Cricket live score . Like us on Facebook or follow us on Twitter for more sports updates. You can also download the NDTV Cricket app for Android or iOS.