Leander Paes and Radek Stepanek will have a chance to win their first Slam title of the season, having finished semifinalists at the Wimbledon. 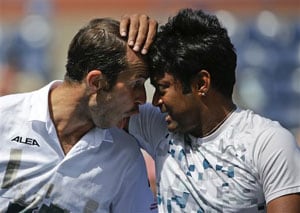 The fourth seeded Indo-Czech pair denied the Bryans a piece of history with their 3-6 6-3 6-4 win as the American twins were trying to become first doubles team since 1951 to collect all four Grand Slam titles in the same year. (Read: Sania-Zheng knocked out in semis)

Ken McGregor and Frank Sedgman had achieved the rare feat of winning Calendar Slam in 1951.

The Bryans ran away with the first set but faced stiff challenge in the second, which Paes and Stepanek dominated to take the match to full length.

Paes stood out with his backhand slice and chips while Stepanek was solid with his blistering double-handed backhand.

Paes and Stepanek will have a chance to win their first Slam title of the season, having finished semifinalists at the Wimbledon.

The two teams began well but Paes and Stepanek handed the advantage to the Bryans in the sixth game of the opening set.

Facing a breakpoint, Stepanek double faulted which handed the Bryans a 4-2 lead, which soon became a comfortable 5-2 when the Americans held the next.

Paes served to stay in the set and he held the game, which featured an entertaining 21-shot rally.

Bob served at love to quickly wrap up the first set in just 29 minutes.

The fourth seeds were put under pressure straight away as they were facing a break point in the first game of the second set but Paes saved that with a volley winner at the net.

However the advantage was lost when the Indian dropped his serve in the next, double faulting at 30-40.

Nevertheless, they kept fighting and succeeded in breaking Bob in the sixth game. As Paes held his own, they soon had a 5-2 cushion and kept that lead to force a third set.

The Indo-Czech combo had chance to get an early break in the decider on Mike's serve and after an engrossing tussle they succeeded in converting the fourth chance of the third game to open up a mini 2-1 lead and consolidated that to 3-1 with a hold.

Stepanek saved three breakpoints in the sixth game to take a 5-1 lead but Paes failed to serve out the match in the eighth, allowing Bryans to comeback.

Bryans closed the gap to 4-5 however, Stepanek served out the match after some anxious moment.

Comments
Topics mentioned in this article
Tennis Tiger Woods US Open 2013 Leander Paes Mike Bryan Bob Bryan Radek Stepanek Sania Mirza Maria Sharapova
Get the latest Cricket news, check out the India cricket schedule, Cricket live score . Like us on Facebook or follow us on Twitter for more sports updates. You can also download the NDTV Cricket app for Android or iOS.