Listen to the latest songs, only on JioSaavn.com
US Open 2013
Sports Home
Story ProgressBack to home

US Open: James Blake's career ends with first round loss to Ivo Karlovic

James Blake had won 11 straight first-round matches at Flushing Meadows since losing in his debut in 1999. He has been ranked as high as No. 4 in the world in his career and reached three Grand Slam quarterfinals. 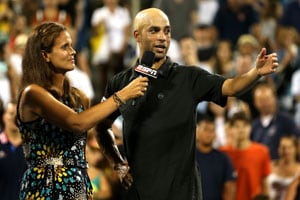 James Blake walked off the court at the U.S. Open for the last time as a singles player early Thursday morning after blowing a two-set lead and losing in a fifth-set tiebreaker.

Blake had announced Monday that this would be his last tournament, ready to spend more time with his wife and young daughter. He couldn't quite extend his stay another round. Blake will still play doubles.

He rallied from down a break in the final set to force the tiebreaker, but couldn't overcome the 6-foot-10 Croat's big serve at the end. Karlovic closed out the victory in 3 hours, 24 minutes with his 38th ace.

Blake threw his sweat bands, white shirt and black hat into the stands at Louis Armstrong Stadium, where the fans stayed late to try to will him to victory.

"That ovation makes me realize that everything I did, every bit of hard work, was worth it," he said in an on-court interview, his eyes welling up.

Blake had won 11 straight first-round matches at Flushing Meadows since losing in his debut in 1999. He has been ranked as high as No. 4 in the world in his career and reached three Grand Slam quarterfinals.

"I'm proud that I have the rest of my career to look back on as some pretty good matches, some pretty good wins," he said. "Hopefully this won't be my lasting memory, is that loss, up two sets to love, two tiebreakers in the fourth and fifth, losing both of those. Pretty much in my hands at times, and I was the one that I felt like I gave them away."

"I definitely won't sleep a whole lot tonight," Blake said. "I'll be thinking about opportunities I had."

Karlovic hadn't been any better - he came in 3-13. His one previous comeback from down two sets was also against Blake, at the 2009 Davis Cup.

Other players lauded Blake this week for his friendliness and tenacity. His career could have ended nearly a decade ago, but he kept making memories.

In 2004, he slipped on the clay during a practice in Rome and slammed into a net post, which broke vertebrae in his neck. Later that year, his father died from stomach cancer. Then an illness temporarily paralyzed part of his face.

By 2006, he reached his highest ranking. In 2007, he helped the United States beat Russia in the Davis Cup final, the Americans' first title in 12 years, the country's longest gap between victories.

He won 10 singles titles, most recently in 2007. Twice he reached the quarterfinals at the U.S. Open, truly a hometown tournament that seemed to bring out his best play.

He lost in the quarters at Flushing Meadows to Andre Agassi in 2005, and to Roger Federer the following year.

The Agassi match was probably his most memorable, and it played out like the final one of his career: He won the first two sets, then lost in the fifth-set tiebreaker.

Comments
Topics mentioned in this article
Tennis Ivo Karlovic James Blake US Open 2013
Get the latest Cricket news, check out the India cricket schedule, Cricket live score . Like us on Facebook or follow us on Twitter for more sports updates. You can also download the NDTV Cricket app for Android or iOS.