US Open 2013: During defeat to Serena Williams, Francesca Schiavone hugs a ballboy

Schiavone was thrashed 6-0, 6-1 by the defending champion and turned to a ballboy for solace. 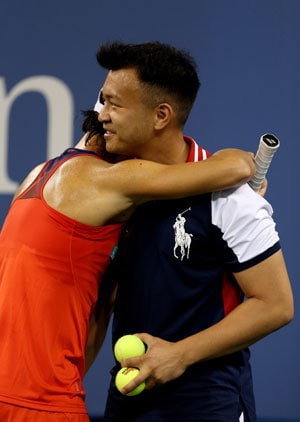 As she slipped to a 6-0, 6-1 US Open defeat to Serena Williams on Monday, Francesca Schiavone slumped into the arms of a ballboy on Arthur Ashe Stadium court.

The Italian veteran was looking at a double-bagel in her first round tie after being given the run around by the defending champion when she embraced the startled youngster.

"I don't need a hug in that moment. I needed a game, points," said the 33-year-old former French Open champion.

Comments
Topics mentioned in this article
Tiger Woods Tennis US Open 2013 Shahar Peer Aisam-Ul-Haq Qureshi Leander Paes Andy Roddick Lukas Dlouhy Rohan Bopanna Caroline Wozniacki Francesca Schiavone Sania Mirza Maria Sharapova
Get the latest updates on India vs Australia Series, check out the India vs Australia Schedule for 2020-21 and Ind vs Aus live score . Like us on Facebook or follow us on Twitter for more sports updates. You can also download the NDTV Cricket app for Android or iOS.