The 24-year-old Russian was diagnosed with Hodgkin's lymphona in 2011, an illness which forced her off tour until May this year. 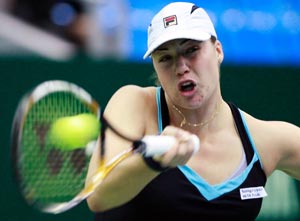 Cancer survivor Alisa Kleybanova enjoyed a winning return to Grand Slam tennis on Monday at the US Open, but pleaded with fans not to pity her after her courageous battle for survival.

The 24-year-old Russian was diagnosed with Hodgkin's lymphona in 2011, an illness which forced her off tour until May this year.

Kleybanova, who once reached 20 in the world but now stands at 363 in the rankings, marked her first major appearance in over two years with a 6-4, 3-6, 7-5 win over number 44 Monica Puig of Puerto Rico.

"I'm happy that all those things are over for me now. I went through them. I came as a winner in that battle," said Kleybanova.

"I hear a lot from people that I'm a big inspiration for them. A lot of people now look up to me. I mean, I think it's great. But I don't want to be an example.

"I'm not trying to show anything or whatever. I do it for myself. I want to play tennis. I'm not trying to pretend anything. But if my story inspires people and gives them more belief, makes them feel stronger at some point, that's great."

Kleybanova came off the tour in the middle of 2011 and played just one tournament in Miami in 2012 before launching her comeback on a full-time basis in May this year.

It began with baby steps at second-tier tournaments before Kleybanova returned to the big time in Toronto, where she lost first round, and then at Cincinnati, where she won one match before heading for New York.

It was a comeback she was already dreaming of when she was first diagnosed.

Back then she announced the bombshell news on her website under the headline: "Alisa Kleybanova defeats Hodgkin's Lymphoma 6 Love, 6 Love."

"I just wanted to come back on the court so much. I wanted to play tennis again so much that it wasn't a question for me," said the Russian.

"I wanted to be back healthy and play again. I was very patient. I wasn't so stressed about those things. Just took it as part of like when you do very tough training, you know it's going to be tough.

"You have to go through this, because after you'll get better and things will get better."

Kleybanova next faces Serb ninth seed Jelena Jankovic for a place in the last 32.

Comments
Topics mentioned in this article
Tennis Francesca Schiavone Maria Sharapova Sania Mirza Leander Paes Aisam-Ul-Haq Qureshi Rohan Bopanna Jelena Jankovic Andy Roddick Lukas Dlouhy Alisa Kleybanova Monica Puig US Open 2013 Tiger Woods
Get the latest updates on India vs Australia Series, check out the India vs Australia Schedule for 2020-21 and Ind vs Aus live score . Like us on Facebook or follow us on Twitter for more sports updates. You can also download the NDTV Cricket app for Android or iOS.