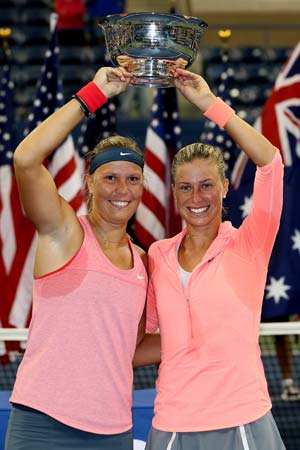 It was the second Grand Slam title in as many days for Hlavackova, who joined Max Mirnyi of Belarus in winning the mixed doubles on Friday.

"It has been amazing," Hlavackova said. "I cannot believe I won two Grand Slams in two weeks. I want to thank Lucie. She helped me as much as Max did."

She became the first player to win two US Open titles since Zimbabwe's Cara Black in 2008, when she joined American Liezel Huber to win the women's doubles title and India's Leander Paes to win the mixed.

Dellacqua, 28, revealed that she was gay at the US Open when she announced at the start of the tournament that she and her partner Amanda had become parents last month of a baby boy named Blake.

"You get out here to do your best, to play for your family," she said. "I look forward to seeing them soon."

Dellacqua and Barty, in only their eighth event together, were runners-up this year at the US and Australian Opens as well as Wimbledon.

They are the first Aussie women's pair to reach the US Open final since Wendy Turnbull and Kerry Melville Reid in 1978.