The US siblings won Olympic gold last year and are already the first men's doubles team in the Open era to hold all four Grand Slam doubles titles at once after winning last year's US Open and this year's Australian and French Open and Wimbledon crowns. 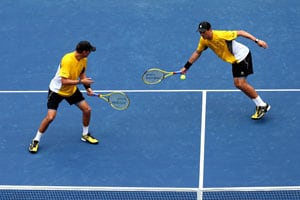 Reigning champions Bob and Mike Bryan, trying to complete the first calendar-year Grand Slam men's doubles sweep since 1951, rallied from a set and a break down Sunday to reach the US Open quarter-finals.

The 35-year-old American twins rallied to defeat Canada's Daniel Nestor and Vasek Pospisil 6-7 (1/7), 7-5, 6-2, capturing 10 of the final 13 games in the match to advance after two hours and three minutes.

The Bryans are trying to become the first men's doubles team to capture a calendar-year Grand Slam since 1951, when Australians Ken McGregor and Frank Sedgman became the only ones to achieve the feat so far.

"It was really on our minds," he said.

The US siblings won Olympic gold last year and are already the first men's doubles team in the Open era to hold all four Grand Slam doubles titles at once after winning last year's US Open and this year's Australian and French Open and Wimbledon crowns.

"It has been a great 12 months," Bob Bryan said. "We've been getting the breaks."

The Bryans switched return sides for the first time in at least three years after dropping the first set, hoping the tactical change might pay dividends against Nestor, a veteran doubles player, and his new partner.

"We just wanted a few break points there," Mike Bryan said. "We might have thrown them a new wrinkle in there."

Trailing 3-4 in the second set, the Bryans broke in five points -- the last when left-hander Nestor netted a volley as he net on match point as well -- and broke again in the fourth and final games of the third set.

The Bryans, right-hander Mike the elder by two minutes over left-hander Bob, have carved their own niche with record-setting success as well as a high-energy style featuring chest-bumping during matches.

"We might look like we're relaxed and jumping around, but luckily we're not miked," said Mike Bryan.

They are already assured the season-ending world number one ranking, the earliest such clinch ever recorded and are the only men's doubles duo with at least 50 wins at every Slam.

Comments
Topics mentioned in this article
Tennis Tiger Woods Leander Paes Bob Bryan Mike Bryan Maria Sharapova Sania Mirza US Open 2013
Get the latest Cricket news, check out the India cricket schedule, Cricket live score . Like us on Facebook or follow us on Twitter for more sports updates. You can also download the NDTV Cricket app for Android or iOS.