Both US star Williams and Nadal captured the top prize of $2.6 million for winning the year's final Grand Slam title on the New York hardcourts plus a $1 million bonus for having the most successful run in pre-US Open tournaments. 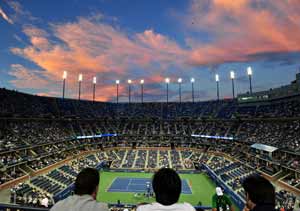 Rafael Nadal and Serena Williams each took home a record $3.6 million in prize money for winning US Open titles, but both champions lamented that much of their prize was going to be taken in taxes.

Both US star Williams and Nadal captured the top prize of $2.6 million for winning the year's final Grand Slam title on the New York hardcourts plus a $1 million bonus for having the most successful run in pre-US Open tournaments.

"The prize money is great for the sport," Nadal said. "The sport is bigger and bigger. Is a lot of money, is true. The only thing that we can say is thanks to the US Open for that improvement on our sport."

The US Tennis Association increased the prize money to record levels this year and the victory boosted 13-time Grand Slam champion Nadal's career total above $60 million, but it also means more money out of the champion's pockets in taxes.

"At the end, it's a lot of money anyway, but that's not the real prize money," Nadal said. "You have to pay the tax, and in Spain today it is 56 (percent), I think.

That conversion factor will shrink the Euro figure for Nadal even more, which at least is not a factor for Williams, who surpassed $9 million for the season, a women's prize money record, and $50 million for her career.

Williams, a 17-time Grand Slam winner and five-time US Open champion, faces a hefty bite from "Uncle Sam", the mythical US representation of the government often used in reference for taking taxes from paychecks.

"Someone told me today I passed 50 (million), but half of that goes to my Uncle Sam. I love him. I'm always giving him half my money."

Williams, however, said she has never personally taken home a check from an event.

"I never in my life have picked up a check," she said. "I don't play tennis for the money. I love Grand Slams.

"I think my dad got me into tennis because of the money, but me being naive and silly, I never thought about it."

Comments
Topics mentioned in this article
Tiger Woods Tennis US Open 2013 Sania Mirza Maria Sharapova Rafael Nadal Leander Paes
Get the latest updates on ICC T20 Worldcup 2022 and CWG 2022 check out the Schedule, Live Score and Medals Tally. Like us on Facebook or follow us on Twitter for more sports updates. You can also download the NDTV Cricket app for Android or iOS.