No double trouble for Serena Williams at US Open

Serena Williams would meet a fellow American seed, either number 15 Sloane Stephens or number 23 Jamie Hampton, in the fourth round. Stephens defeated Williams in the Australian Open quarter-finals back in January. 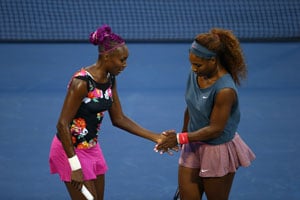 Defending champion Serena Williams has lost only four games on her way to the third round of the US Open and being forced to play matches on back-to-back days is no extra worry to the world number one.

Williams defeated Russian-born Kazakh Galina Voskoboeva 6-3, 6-0 on Thursday in a match postponed from Wednesday by rain. Next in the American star's path is a Friday night match with another Russia-born Kazakh, Yaroslava Shvedova.

"I'm definitely used to it," Williams said. "I usually play every day. In regular tournaments I don't have a day off. Only in the Grand Slams I get the luxury of having a day off. I guess I didn't get that."

Williams shrugged off being rescheduled on a day when seven other matches were postponed.

"I was fine," she said. "I was just waiting and realized that I wasn't going to play, so I went home."

But including an opening-round doubles match with sister Venus, Williams will have three trips to the court in two days and an extra load as she fights for a 17th Grand Slam crown and fifth US Open title.

"Definitely gives you more time to work on things you want to do in your next match, so that's kind of more or less how I look at it, just as getting more time to be more ready," Williams said.

"I'm just trying to do the best I can, just always trying to get a little better."

Williams pondered how her younger self who won her first Grand Slam title at the 1999 US Open would react to seeing where she has risen.

"I always wanted to win a Grand Slam and then I kind of got greedy and I kept wanting to win more," Williams said. "I don't think I would be that surprised."

Williams would meet a fellow American seed, either number 15 Sloane Stephens or number 23 Jamie Hampton, in the fourth round. Stephens defeated Williams in the Australian Open quarter-finals back in January.

"We'll see what happens," Williams said. "You have to be ready for everything. Sloane plays excellent and Jamie has been playing really well. Hopefully I can just try to keep up."

Asked if having doubles helps soften the sting of a singles defeat, Williams admitted there was no easing her misery after a loss.

"It helps," she said. "I mean, nothing really for me ever really softens anything, but it definitely helps because you're still in the competition and you still want to walk away with some sort of a trophy."