The fourth seeded Indo-Czech pair demolished the second seeded Austria-Brazilian pair 6-1 in 6-3 in one hour and 12 minutes at Arthur Ashe stadium. 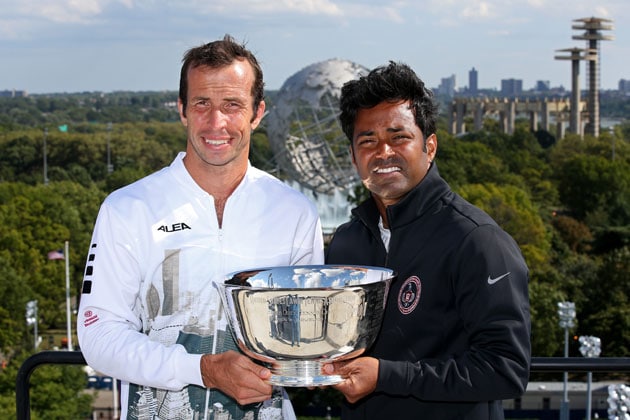 New York: Leander Paes won his eighth men's doubles Grand Slam title, and 14th overall, as he combined with Radek Stepanek to clinch US Open trophy with a dominating victory over Alexander Peya and Bruno Soares in the title clash, in New York on Sunday. (All the highlights from the match)

The fourth seeded Indo-Czech pair demolished the second seeded Austria-Brazilian pair 6-1 in 6-3 in one hour and 12 minutes at Arthur Ashe stadium. (EXCLUSIVE: Paes tells NDTV he never thought he would be playing at 40)

It was a perfect climax for Paes and Stepanek, who came into the US Open with title in Winston Salem Open, as they won their second major title together, having won Australian Open last year. (In pics: How Paes and Stepanek lift their maiden US Open crown)

It was third US Open title for 40-year-old Paes and the previous two had also come with Czech partners. In 2006, the Indian won with Martin Damm and in 2009 with Lukas Dlouhy.

Last year at the US Open, Paes had ended runner-up with Stepanek, losing to Bryan brothers. (Leander Paes, oldest man to win a Grand Slam, defies odds in US Open triumph)

Now Paes has 14 major titles in his cupboard, including six mixed doubles trophies. Stepanek has two Grand Slam titles, both with Paes.

It was one of the most lop-sided US Open title match as Peya and Soares failed to put up a fight. They had no clue whatsoever on how to counter the rampaging Indo-Czech combine.

Peya also required a medical timeout for a back problem in the second set while trailing 1-3. Peya was in pain but did not give up and even went on to hold his serve in that game.

Paes hit a forehand winner to earn the championship point and then hit a backhand volley to seal the trophy win. (Paes dedicates win to father of his tennis guru)

Paes and Stepanek 23 winners to eight of their rivals. They won 66 points while Peya and Soares 40.

Paes acknowledged Stepanek's resilience as he came back well from a back surgery early this year. (Top five moments of Paes' career)

"Find someone from Czech republic that's my advise to anyone who is looking for a doubles partner. They are hard working guys. I have to thank him. He had lot of adversities this season, coming out of injury and surgery it's amazing to stand here. I have to thank him," Paes said. 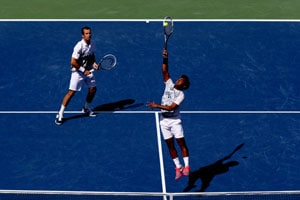 "It is no shame to lose to these guys," said Peya.

Peya and Soares struggled to hold serve and too many unforced errors only made the job tough for them.

In contrast, whatever Paes and Stepanek did, yielded them desired result. Yet again Stepanek's serve and Paes' net play was superb.

Peya and Soares had two break chances -- in the first and fifth games in the opening set -- but could convert none.

The back problem to Peya in the second set reduced the match to a formality as the second seeds could not have challenged their in-form rivals with an injury handicap.

At the start, Peya hit a crushing forehand winner to earn a breakpoint in the very first game but Stepanek served well to hold and what followed was complete annihilation of pair.

Paes and Stepanek raced to a 5-0 lead as they broke both Peya and Soares comfortably.

Soares held game number six to save themselves blushes as Paes served out the set in the next game.

Comments
Topics mentioned in this article
Tennis Radek Stepanek Leander Paes US Open 2013
Get the latest Cricket news, check out the India cricket schedule, Cricket live score . Like us on Facebook or follow us on Twitter for more sports updates. You can also download the NDTV Cricket app for Android or iOS.