Leander Paes almost suffered a broken nose when a ball hit him in the face during their second round of US Open against Daniel Brands and Philipp Oswald. 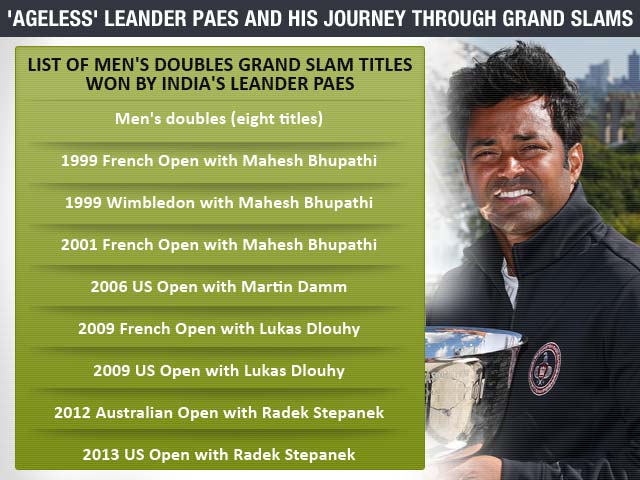 Leander Paes became the oldest man to win a Grand Slam title on Sunday when he and Radek Stepanek took the US Open doubles title, but their journey to the championship was almost scarred by tragedy.

It was their second major title as a pair, the Asian star's third in New York, eighth in men's doubles and 14th overall. (In pics: How Paes and Stepanek lift their maiden US Open crown)

But Stepanek admitted victory had not been drama free.

Paes almost suffered a broken nose when a ball hit him in the face during their second round against Daniel Brands and Philipp Oswald, before the duo got caught up in another medical drama.

"A security girl was standing by the court. She passed out. I just ran there to see what happened and ran for water, towel, ice, everything, then I checked-up on Lee again, to see if he's doing fine, then back to this girl," he said.

"We took quite a long time to get help. Her heart had stopped twice during those five or 10 minutes. They brought her back. I know she was fine. It was great news."

Paes and Stepanek won the 2012 Australian Open title and had ended Bob and Mike Bryan's hopes of completing a calendar year Grand Slam with victory in the semi-finals on Thursday. (Also read: Once the sport of teenagers, Tennis grows older and stronger)

Paes had won the US Open title with Martin Damm in 2006 and Lukas Dlouhy in 2009 and now has eight men's doubles trophies at the majors as well as six mixed doubles crowns.

"My best advice, if you want to succeed at doubles, is to find a partner from the Czech Republic," said Paes, who has now won titles in three different decades.

He also dedicated the win to his coach, Rick Leach, who has been shuttling between New York and California to care for his sick father.

"He's a real champion. Thanks for supporting us," Paes added.

"Radek helped me to get to be the oldest man to ever win a Grand Slam in the Open era. I thank him for that, and we are definitely not done. I'm going after 41 now, 42, and then 43."

Stepanek praised Paes for standing by him when he was out of action for three months earlier this year after undergoing spinal surgery.

"I didn't know how long the recovery would take. It was a real tough time and didn't know when I would be playing again. But Leander stayed with me. He could have gone with another partner," said the Czech.

"That's what makes our friendship so special."

Victory on Sunday was eased when Peya picked up a back injury and needed a medical time-out during the fourth game of the second set.

He continued for the rest of the final but only at walking pace.

Comments
Topics mentioned in this article
Tennis Radek Stepanek Leander Paes US Open 2013
Get the latest updates on Olympics 2020, Olympics 2020 Medal Tally, Live Cricket Score . Like us on Facebook or follow us on Twitter for more sports updates. You can also download the NDTV Cricket app for Android or iOS.