Sania Mirza, who had crashed out of the women's doubles on Monday, progressed to the third round of the mixed doubles event. 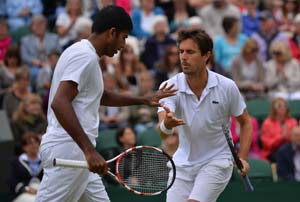 Fourth seeds Leander Paes and Radek Stepanek entered the men's doubles semi-finals at Wimbledon with a 4-6, 6-4, 6-3, 6-4 victory over Julian Benneteau and Nenad Zimonjic.

The Indo-Czech duo lost the first set but came back strongly to claim the next three in two hours and 39 minutes. Paes and Stepanek will face the winner of the Ivan Dodig-Marcelo Melo vs James Blake-Jurgen Melzer clash.

They are joined in the semis by Rohan Bopanna and Eduoard Roger-Vasselin who beat Robert Lindstedt and Daniel Nestor 7-5, 7-6, 6-7, 6-7, 6-2. The Indo-French pair won the rain-affected five setter against the Swedish-Canadian duo in two hours and 45 minutes on court number two.

They had earlier brought down third seeded Austrian-Brazil pair Alexander Peya and Bruno Soares 6-4, 4-6, 7-6(5), 6-2 in the fourth round. This is Bopanna's first-ever entry into the semis at the All England Club. It will be his third Grand Slam semifinal appearance, having played US Open last-four in 2010 and 2011.

Bhupathi and his mixed doubles partner Daniela Hantuchova had previously lost in the first round to Mark Knowles and Sabine Lisicki.

Sania Mirza, who had crashed out of the women's doubles event on Monday, kept her mixed doubles campaign alive after progressing to the third round. Seeded second, Sania and Horia Tecau beat Julia Georges-Martin Emmrich 6-3, 6-4 to enter mixed doubles Round 3.

Sania and Tecau will next meet Eric Butorac-Alize Cornet, who ended Leander Paes' mixed doubles campaign in the second round. Paes and Saisai Zheng were comprehensively beaten 6-3, 6-3 by Butorac-Cornet.