Paes and Stepanek had to battle for two hours and 12 minutes to overcome 14th seeded veteran French pair of Michael Llodra and Nicolas Mahut 7-5 4-6 6-3. 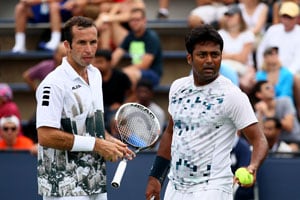 Leander Paes and Radek Stepanek, fought their way into the men's doubles quarterfinals while Sania Mirza and Jie Zheng hardly broke a sweat to book a berth in the women's doubles last-eight stage, here on Sunday.

Paes and his Czech partner, seeded fourth, had to battle for two hours and 12 minutes to overcome 14th seeded veteran French pair of Michael Llodra and Nicolas Mahut 7-5 4-6 6-3.

Up next for Paes and Stepanek could be India's Divij Sharan and his Taipei partner Yen-Hsun Lu. The duo defeated the Israeli team of Jonathan Erlich and Andy Ram 6-4 5-7 7-6 (2) in a hard-fought contest.

Divij and Lu have a tough match on hand as they face Pakistan's Aisam-ul-Haq Qureshi and the Netherlands' Jean-Julien Rojer, a combination that is seeded fifth in the season's final Grand Slam. If Divij and Lu win though, they will face Paes and Stepanek in the quarters.

Meanwhile, Rohan Bopanna's US Open campaign too came to an end in the pre-quarters as the sixth seed Indian and his partner Edouard Roger-Vasselin, were knocked out 4-6, 4-6 by Great Britain's Colin Fleming and Jonathan Marray.

Sania and China's Zheng, seeded 10th, took out sixth seeds Anna-Lena Groenefeld of Germany and Kveta Peschke of Czech Republic 6-2 6-3 in one hour and 12 minutes.

Sania and Zheng never faced a break point in the entire match and broke their rivals twice in each set to move to the last-eight.

In the Paes-Stepanek match, after trading breaks, the opening set was on serve till the 11th game. The Indo-Czech pair had their first set point in the next game but Stepanek hit a forehand into the net.

He made up for it with a volley to earn the third set point, which they converted to shoot ahead. It wasn't a good start to the second set for Paes and Stepanek as they were down by two break points in the first game. Stepanek though served well to save both, the second one with an ace.

The fourth seeds had their first break chance in the next game but Paes could not return Llodra's serve.

Paes was broken in the seventh game and Llodra served out the set to level the match.

The keenly fought third set turned in Paes-Stepanek favour when they got a break of serve after Mahut netted.

Llodra hit one long to hand Paes and Stepanek two match points and Paes finished it off with an ace.