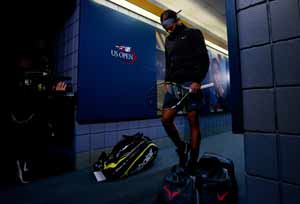 Rafael Nadal on Monday ruled out an assault on a calendar year Grand Slam, a mission so intimidating that only two men have ever achieved it in the sport's history.

"To win all four Grand Slams in one year I think today is impossible for anyone. That's my feeling," said Nadal, who now has eight French Opens, two Wimbledon, two US Open and an Australian title amongst his 60 career crowns.

"Today the best players are there all the time, so to win a tournament like this you have to win against Roger (Federer), against David (Ferrer), against Andy (Murray), against Novak.

"These players are not losing in the early rounds, so that makes it impossible be 100% in every tournament. So when your level is a little bit lower, you will lose against these players 100%."

Sunday's win capped a memorable year for Nadal, whose season only started in February after a seven-month injury layoff, an absence which saw him miss the 2012 US Open as well as the London Olympics and the Australian Open this year. (Also read: Rafa - the champ of all surfaces)

But he now has 10 titles since his comeback, a 60-3 match record and has won all 22 matches he has played on hard courts.

His only blip was a shock first-round loss at Wimbledon, the tight two-week turnaround between Roland Garros and London proving an unsurmountable challenge.

"I never thought something like this could happen, so excited to be back on tour trying to be competitive. But I never thought about competing for all what I competed for this year," he said.

"All the Masters 1000s, the Grand Slams. So it is just more than a dream for me and I'm very happy for everything. I feel very lucky about what happened since I came back.

"It's true that I worked, but even like this you need luck to be where I am today."

Nadal's 13th Grand Slam title puts him four behind the record of 17 held by Roger Federer and one shy of Pete Sampras's 14.

Despite being five years younger than Federer, Nadal insists that he is not even thinking about catching the Swiss star, whose declining powers were highlighted in New York by a fourth-round exit.

"Let me enjoy today. For me, it is much more than what I ever thought, what I ever dreamed," he explained.

"So that's what I'm going to try. Then you never know when that starts, when that finishes, but 13 is an amazing number."

Comments
Topics mentioned in this article
Tennis Leander Paes Rafael Nadal Novak Djokovic Sania Mirza Maria Sharapova US Open 2013 Tiger Woods
Get the latest updates on ICC T20 Worldcup 2022 and CWG 2022 check out the Schedule, Live Score and Medals Tally. Like us on Facebook or follow us on Twitter for more sports updates. You can also download the NDTV Cricket app for Android or iOS.