It might just have been a glitch in the ATP software as the head-to-head section in the Rafael Nadal vs Novak Djokovic on its website showed the Spaniard as the winner of US Open 2013. Many, though, are already backing Nadal due to the supreme form that the man is in. 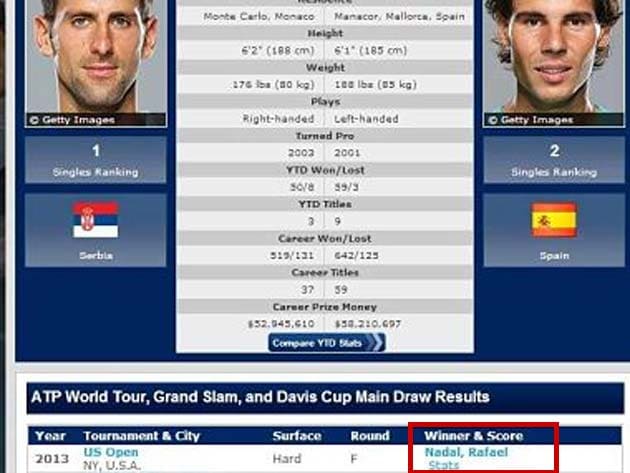 Rafael Nadal plays Novak Djokovic in probably the most awaited tennis Grand Slam Final clash of the year but the ATP website has apparently given winners' tag to the Spaniard, already. The match is scheduled for 02:30 AM IST but Djokovic is surely not the 'ATP favourite'. (Highlighted in the image above)

Twitter meanwhile was abuzz, making fun of the faux pas. This is apparently not the first time that ATP has committed such a gaffe, as a tennis fan tweeted the following: "And yet again #ATP has looked into their crystal bowl, giving the USO to Rafa . Some Rafan working for their website?," @Steph73_NL wrote. (Related read: Novak Djokovic braced for Rafael Nadal's ultimate challenge)

Following are some other tweets by fans:

"LOL according to the ATP website, Rafa already won the US Open." - Erin, @E_Teezey

"According to the ATP's website, Nadal is the 2013 US Open Champ. Here I was thinking the final is tonight. #ATPdrunk." Gerjo van der Merwe, @Gerjo9.

Comments
Topics mentioned in this article
US Open 2013 Rafael Nadal Novak Djokovic Eoin Morgan Danny Gabbidon Carlton Cole Tennis
Get the latest updates on IPL 2021, IPL Points Table , IPL Schedule 2021 , live score . Like us on Facebook or follow us on Twitter for more sports updates. You can also download the NDTV Cricket app for Android or iOS.