He has missed months of action at a time over the past two seasons. On Tuesday, Fish stopped playing in the third set of his match against Jarkko Nieminen at a hard-court tournament in Winston-Salem, N.C., because of heat stroke. 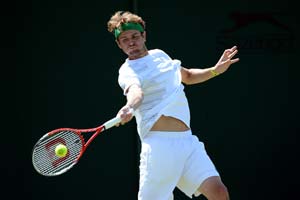 Former top-10 player Mardy Fish pulled out of the U.S. Open on Wednesday, the latest setback in his bid to make a comeback on tour after dealing with heart issues.

The U.S. Tennis Association said the 31-year-old American cited "personal reasons" for his withdrawal. The draw for the year's last Grand Slam tournament is Thursday, and play begins Monday.

Fish's Twitter feed carried this message Wednesday: "Friends, unfortunately my health won't allow me to compete this year at the US Open. Thank you for all your support."

He has missed months of action at a time over the past two seasons. On Tuesday, Fish stopped playing in the third set of his match against Jarkko Nieminen at a hard-court tournament in Winston-Salem, N.C., because of heat stroke.

Fish has played only eight matches on the ATP World Tour in 2013, going 3-5. He skipped all of the Grand Slam tournaments this season while entering only five other events on the main tour.

A year ago, Fish reached the fourth round at the U.S. Open but withdrew before he was to face Roger Federer at that stage, saying it was for "precautionary measures" on doctor's orders. Fish missed about 21/2 months earlier last season because of an accelerated heartbeat.

The night after he lost a match at Key Biscayne, Fla., in March 2012, Fish's heart started racing uncontrollably. That May, doctors induced extreme palpitations to try to pinpoint the problem. He returned for last year's Wimbledon.

During the hard-court tournament in Washington earlier this month, Fish spoke about the difficulties he's faced the last two seasons.

"I struggled mightily during the U.S. Open last year. So those sort of post-traumatic experiences that I've had - that I have now - are what I need to get over right now," he said. "But it's a process. It's not an easy game. And fitness is as big a part of it as playing, and sometimes that's trouble - spells trouble - for me."

Asked then whether his heart or mind is the source of greater problems, Fish replied: "It's a little bit of both. A lot of it's mental, what I went through, and obviously a little bit of it was physical, too. I can't say it any differently than: It's just going to be a day-to-day thing right now."

Fish, who was born in Minnesota and now lives in Los Angeles, reached a career-best ranking of No. 7 in 2011, and is 173rd this week.

He is a three-time Grand Slam quarterfinalist - once each at the U.S. Open, Wimbledon and the Australian Open, most recently at Flushing Meadows in 2011.

Comments
Topics mentioned in this article
Tennis Jarkko Nieminen Mardy Fish US Open 2013
Get the latest Cricket news, check out the India cricket schedule, Cricket live score . Like us on Facebook or follow us on Twitter for more sports updates. You can also download the NDTV Cricket app for Android or iOS.