Under-19 World Cup: Kartik Tyagi Stars With The Ball As India Beat Australia In Quarter-Finals

India expertly defended a low total to beat Australia by 74 runs to secure a spot in the semi-finals of the Under-19 World Cup. 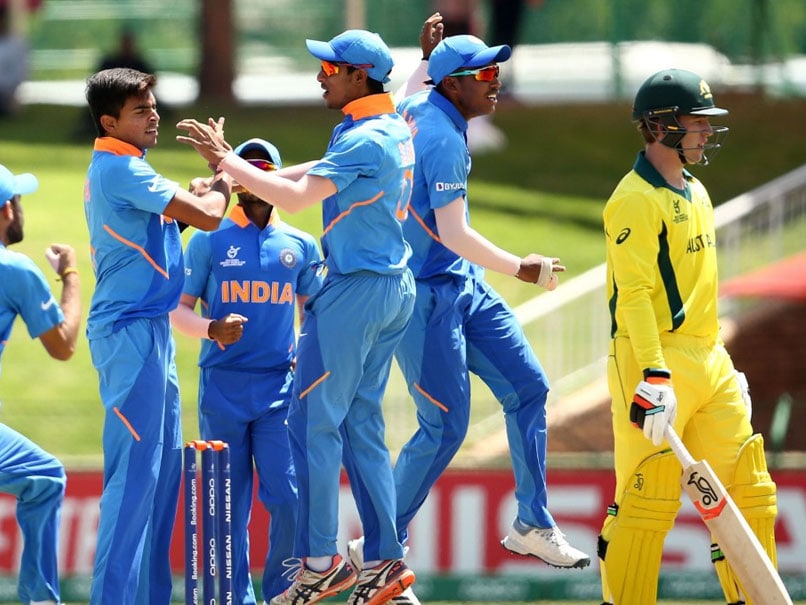 The India Under-19 team put on a brilliant display with the ball to defend a low total and beat Australia by 74 runs in the quarter-finals of the ongoing Under-19 World Cup in South Africa on Tuesday. The three-wicket blitz in India' first over, bowled by pacer Kartik Tyagi, proved to be too much for the Australian side to come back from as they could only manage to score 159 before being bowled out in their chase of 233. India will now face the winner of the match between Pakistan and Afghanistan in the semi-finals.

A late burst by Atharva Ankolekar, whose run-a-ball half-century was critical for India along with a gritty 62 by Yashasvi Jaiswal helped India post 233/9 in their 50 overs.

Australia were favourites to win it when they walked out to bat. Six balls later, it was a different story altogether.

Australia's innings got off to the worst possible start, with opener Jake Fraser-McGurk being the victim of a mix-up on the very first delivery and getting run out. Captain Harvey McKenzie was next to go, trapped LBW by Tyagi on the fourth delivery.

Lachlan Hearne came to bat, but his time on the pitch was short lived as Tyagi hit his stumps.

Australia prevented Tyagi  from getting his hat-trick, but when he came back for his next over, he struck again, as Oliver Davies edged him to Jaiswal.

Patrick Rowe and opener Sam Fanning then steadied the ship for Australia with a 51-run stand but Tyagi came back to dent the Australians again, removing Rowe in the 22nd over.

Liam Scott, batting for Australia as a concussion substitute for the injured Corey Kelly, joined Fanning in the middle and the two put down anchor and put on a mighty resistance. They moved at a slow pace, hitting the occasional boundaries and at one point it looked like India had lost their early advantage.

But India's spin sensation Ravi Bishnoi got the crucial breakthrough in the 41st over, drawing a faint edge from Scott's bat, bringing to an end an impressive 81-run stand.

If Australia still held any hopes, they were dashed in the next over.

Sam Fanning got glove on a short ball by pacer Akash Singh and Dhruv Jurel gleefully accepted the catch. Connor Sully was out trying to take a quick single off the very next delivery and Singh got one to seam in and hit Todd Murphy's stumps right after, making it three wickets in three balls and the end of Australia's hopes of a semi-final berth.

It took Akash Singh three deliveries in the next over to castle Matthew Willans and secure a huge win for Priyam Garg's team.

Kartik Tyagi, with four wickets for 24 runs in eight overs, was the undoubted match winner for India on the day.

India, put in to bat first, had started slowly on a sluggish pitch and lost their first wicket when Divyaansh Saxena was caught behind off the bowling of Corey Kelly for 14. Tilak Varma did not last either and he fell for two to Todd Murphy.

Connor Sully then got the big wicket if India skipper Priyam Garg, who could only make five runs. India were suddenly 54-3 and reeling.

Yashasvi Jaiswal then showed great maturity and application to stich a 48-run stand with Siddhesh Veer before he was castled by Australia leg-spinner Tanveer Sangha. Jaiswal played his part however, having scored his third half-century of the tournament.

Dhruv Jurel was soon to go as well before Siddhesh Veer and Atharva Ankolekar put on a mini-resistance of sorts. But Veer was soon to go, bringing Ravi Bishnoi to the crease.

Ravi Bishnoi, who has earned praise for his bowling in the tournament, upped the tempo for India and soon Ankolekar also joined in.

The two put on 61 runs for the seventh wicket before Bishnoi was run out for 30. Ankolekar played the finisher's role with his 54-ball 55 helping India to a decent total, which at one point seemed unlikely.

Australia U19 Atharva Ankolekar India Under-19 vs Australia Under-19, Super League Quarter Final 1 Kartik Tyagi Yashasvi Jaiswal Cricket
Get the latest updates on IPL 2021, check out the IPL 2021 Schedule and Indian Premier League Live Score . Like us on Facebook or follow us on Twitter for more sports updates. You can also download the NDTV Cricket app for Android or iOS.