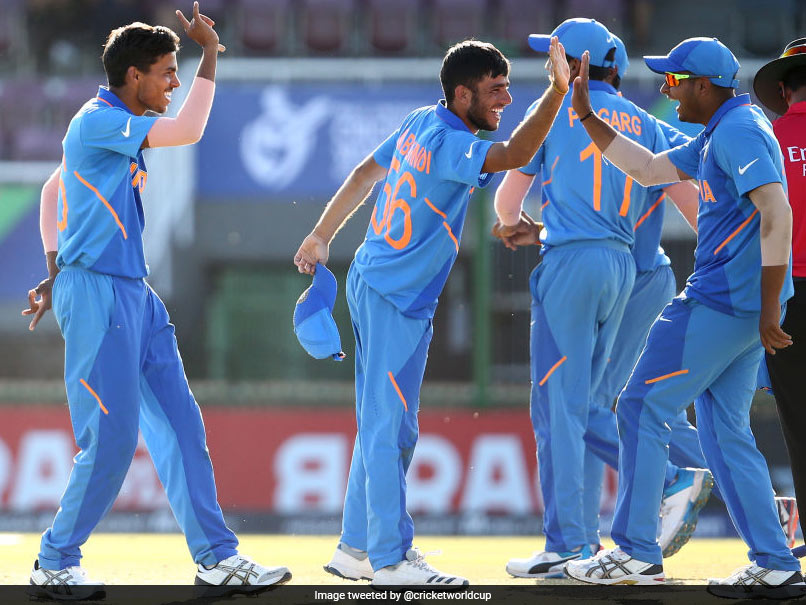 Kartik Tyagi (4 for 24 runs) starred with the ball as India beat Australia by 74 runs to reach the semifinals of the 2020 Under-19 World Cup on Tuesday. Chasing a modest total, Australia got off to a poor start as a mix-up between their two openers Sam Fanning and Jake Fraser-McGurk cost them a wicket on the very first ball of the innings. McGurk departed without even facing a single ball. After the first wicket, Tyagi picked two more wickets -- on the fourth and the fifth deliveries -- in the the over to give India a perfect start. In his next over, he removed Oliver Davies to push Australia further back in their run chase. However, Fannning (75 off 127) stitched solid partnerships with wicket-keeper Patrick Rowe (21 of 40) and Liam Scott (35 off 71) for fifth and sixth wickets respectively to keep his side alive in the run chase. Just when things were starting to look good for Australia, they lost three wickets in three balls and lost the momentum as well as the match as India sealed a comfortable 74-run victory to enter the semifinals. (SCORECARD)

Australia U19 Senwes Park, Potchefstroom Under 19 World Cup 2020 Cricket Live Score Live Cricket Score Live Blogs Priyam Garg Yashasvi Jaiswal India Under-19 vs Australia Under-19, Super League Quarter Final 1
Get the latest updates on T20 World Cup, check out the T20 World Cup Schedule and Live Score . Like us on Facebook or follow us on Twitter for more sports updates. You can also download the NDTV Cricket app for Android or iOS.