Defending champions India will be the overwhelming favourites when they start their campaign against Sri Lanka in the ICC U-19 World Cup on Sunday. 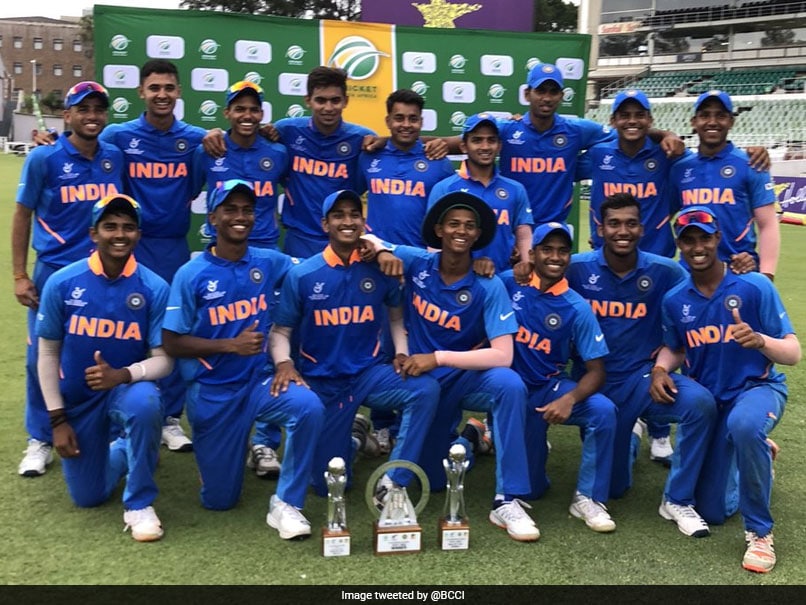 India are clubbed with Japan, New Zealand and Sri Lanka in group A.© Twitter

Defending champions India, with five new IPL recruits in their ranks, will be the overwhelming favourites when they start their campaign against Sri Lanka in the ICC U-19 World Cup on Sunday. India have time and again showed at the junior level the gulf that exists between them and other teams, the testimony being their two titles and one runner-up finish in the last four edition. Even in the run-up to the ongoing edition, India have won a bilateral series against South Africa, followed by a Quadrangular contest.

The 'Boys in Blue' also beat Afghanistan comprehensively in a practice game, and the same Afghanistan then hammered South Africa in the World Cup opener.

Since Rahul Dravid took over the mantle of junior cricket, the robust structure created has produced many talented players.

In this edition, India's campaign will be headlined by left-handed opener Yashasvi Jaiswal, who recently landed a Rs 2.4 crore contract with IPL franchise Rajasthan Royals.

Still weeks short of becoming eligible for procuring a driving license, Jaiswal is already touted as the next big thing in junior cricket, having hit a double hundred in the country's Sr National One Day Championship (Vijay Hazare Trophy).

His skipper Priyam Garg, who also has a multi-crore IPL deal, is by far the most experienced player with 12 first-class and 19 List A games to his credit.

The tall fast bowler Kartik Tyagi will also keep everyone interested as those who have watched him bowl, swear by his ability to work up pace.

Then there is leg-spinner Ravi Bishnoi, who is also richer by Rs 2 crore, courtesy Kings XI Punjab (KXIP).

Their opponents Sri Lanka also have a number of players who have played senior representative cricket but in recent times, including in the junior Asia Cup, the Indian team proved to be a far superior opposition.

Left-handers Nipun Dananjaya and Sonal Dinusha are decent players while pacer Amshi de Silva has had some decent performances at the junior level. That could still prove to be no match for India.

Sri Lanka U19 Under 19 World Cup 2020 Cricket
Get the latest updates on IPL 2021, IPL Points Table , IPL Schedule 2021 , live score . Like us on Facebook or follow us on Twitter for more sports updates. You can also download the NDTV Cricket app for Android or iOS.