Divyansh Saxena pulled off a sprawling catch to dismiss the busy Muhammad Haris and end a potentially flourishing partnership. 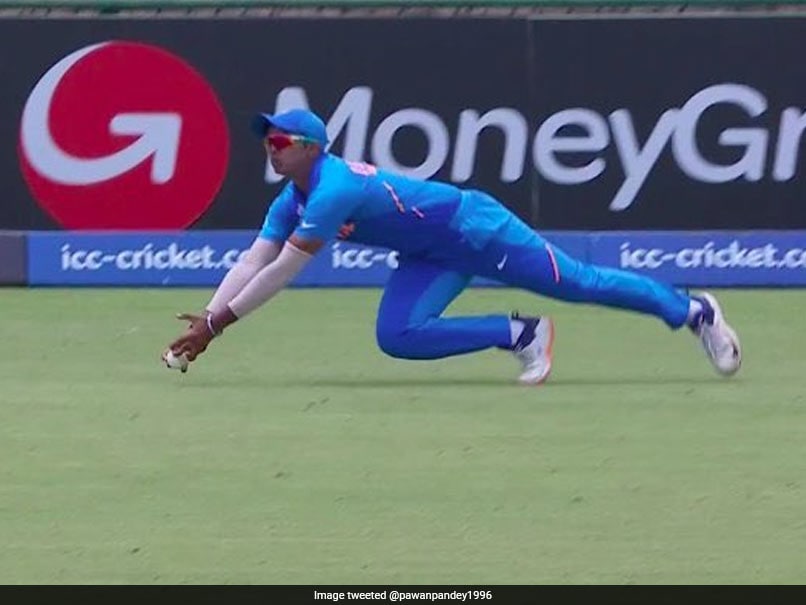 Pakistan were going along nicely in the U-19 World Cup semi-final against India at 146 for four in the 34th over and looked set to post a big total on the scoreboard. However, all that changed with the intervention of a flying Divyansh Saxena. Muhammad Haris was looking good and had given the Pakistan innings a much-needed impetus. He reached 21 runs off just 14 balls and hit the only six of the Pakistan innings but as he swept an Atharva Ankolekar delivery to the square-leg boundary, he failed to take into account the superhuman athleticism of Divyansh Saxena. The Indian youngster moved to his right like a gazelle before putting in a full-length dive to complete a stunning catch that left the opposition shell-shocked.

The catch changed the entire script for Pakistan. From a position of power, they quickly lost their way to hand India the initiative.

Here is the Saxena's effort, which arguably is the catch of the tournament so far:

After losing Haris, Pakistan completely collapsed. The Pakistanis lost the next five wickets, having added just 26 runs and were finally bowled out for 172 in the 43.1 overs.

Sushant Mishra was the pick of the bowlers for India, taking three for 28 off 8.1 overs. He got good support from the likes of Kartik Tyagi and Ravi Bishnoi, who took two wickets apiece.

India's batting superstar Yashasvi Jaiswal was also amongst the wickets, removing the dangerous Haider Ali for 56 while Atharva Ankolekar also chipped in with a wicket.

Pakistan had won the toss and elected to bat but lost opener Muhammad Hurraira for 4 in the second over while Fahad Munir was dismissed for a duck after playing out 16 balls.

Haider Ali and Rohail Nazir then steadied the Pakistan innings with a 62-run partnership but Ali fell to an innocuous delivery from Jaiswal while the next man in Qasim Akram was involved in yet another comical run-out for the Pakistan team.

Pakistan U19 Divyaansh Saxena Yashasvi Jaiswal Under 19 World Cup 2020 India Under-19 vs Pakistan Under-19, Super League Semi Final 1 Cricket
Get the latest updates on ICC T20 Worldcup 2022, check out the Schedule and Live Score. Like us on Facebook or follow us on Twitter for more sports updates. You can also download the NDTV Cricket app for Android or iOS.