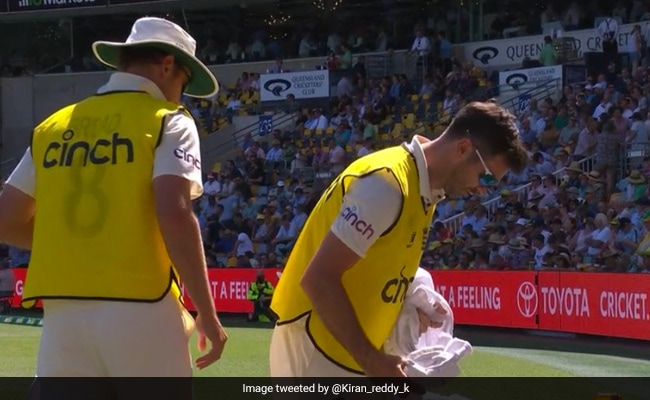 The first Ashes Test between Australia and England at the Gabba in Brisbane has already seen many impressive performances like Pat Cummins' five-for, Travis Head's 152, Joe Root and Dawid Malan's fight back late on Day 3 but cricket fans, the England ones in particular, are still trying to find answers to why Stuart Broad and James Anderson were not part of the XI. And when Broad and Anderson were spotted carrying drinks during England's second innings, they couldn't hold back their emotions.

Twitter was flooded with images of Broad and Anderson – two of England's most successful Test bowlers – carrying drinks together on Friday at the Gabba.

The veteran right-arm seamers were seen carrying drinks on the field when Joe Root and Dawid Malan were leading England's fightback on the third day's play.

Stuart Broad and James Anderson were spotted carrying drinks in the first Test in Brisbane.

Two guys by the name of Broad & Anderson running drinks. Lazy 1156 Test wickets between them pic.twitter.com/FiOPwZfCEP

Anderson and Broad together have 1156 Test wickets between them, making them the most successful bowling pair in world cricket by some distance but both of them were not included in England's XI for the Ashes opener.

England went in with Ollie Robinson, Chris Woakes and Mark Wood as their three specialist seamers with Ben Stokes being the fourth seam-bowling option, a decision which surprised many including the likes of Michael Vaughan, Mark Waugh and Nasser Hussain.

While ECB had clarified that Anderson won't be starting in Brisbane despite being fit as the team management wants to monitor his workload for the five-match series, the omission of Broad, which captain Root said “was a very difficult decision,” surprised many.

Meanwhile, Root and Malan led England's fightback with a solid partnership towards the end of the third day's play. Root was unbeaten on 86 while Malan was batting on 80 as England reached 220 for 2 at stumps, trailing Australia by 58 runs.

Earlier, Travis Head smashed 152 to lead Australia to 425 in their first innings. England were bowled out for 147 on Day 1.

Stuart Broad Social Cricket
Get the latest updates on Fifa Worldcup 2022 and check out  Fifa World Cup Schedule, Stats and Live Cricket Score. Like us on Facebook or follow us on Twitter for more sports updates. You can also download the NDTV Cricket app for Android or iOS.