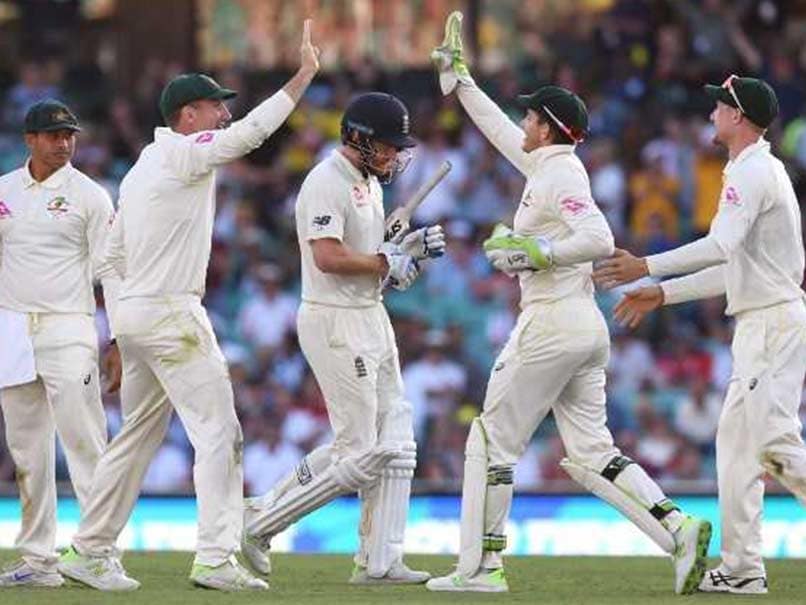 England skipper Joe Root again missed out on an elusive first century in the series as Australia fought back with two late wickets on the opening day of the fifth Test on Thursday. Root was out to a superb diving catch by Mitchell Marsh at square leg for 83 in the day's penultimate over before Jonny Bairstow was caught behind in the final over. Root slumped to his haunches in dismay after missing out on a hundred following his fourth half-century of the series. Root and Malan recovered England's first innings with a 133-run stand after the tourists had slumped to 95 for three following the loss of Melbourne double-centurion Alastair Cook.

Malan lived a charmed life in his half-century, surviving a run out attempt and a dropped Steve Smith catch to provide stoic support for his skipper.

At the close, England were 233 for five with Malan left unbeaten on 55 off 160 balls when Bairstow was caught behind off Josh Hazlewood for five.

Root reached his half-century off 82 balls cover driving Mitchell Marsh for four, but Malan was fortunate not to be run out two balls later.

Malan, on 28, cut towards backward point and there was confusion over the run with Root steaming down the pitch and Malan stuttering and then setting off for the non-striker's end.

But the throw from wicketkeeper Tim Paine was off target and bowler Nathan Lyon was unable to effect the run out with Malan well out of his ground.

Malan had another life on 34 when Smith dropped a sharp ankle-high chance at slip off Lyon.

Cook, who carried his bat through the England first innings in the fourth Test for an unbeaten 244, looked on his way to another big score until Josh Hazlewood struck in the 33rd over.

Hazlewood's leg before wicket appeal was turned down on-field, but on review the ball was found to be just pitching in line with the left-hander's leg stump and hitting middle and Cook was given out for 39 off 104 balls.

It was the third time in the series Cook has fallen lbw and it left him just five runs short of 12,000 career Test runs in his 152nd Test match.

Fellow opener Mark Stoneman earlier hit some nice drives among his four fours before he nicked a rising Pat Cummins delivery to Tim Paine for 24 off 24 balls in the 10th over.

James Vince looked set after 82 minutes at the crease before he shaped for a square cut at a wide Cummins delivery only to be caught behind for 25 in the 29th over.

Usman Khawaja jarred his left knee as he carved out a large chunk of topsoil in sliding to prevent a boundary off Malan in the 56th over but returned to the field later.

Australia have already clinched the Ashes with an unassailable 3-0 lead in the five-Test series.

England are bidding to break through in Sydney, where they have won twice in the last four Ashes Tests.