Khawaja top scored with 171 while Shaun Marsh finished unbeaten on 98 after Steve Smith fell for 83 as Australia built a substantial lead. 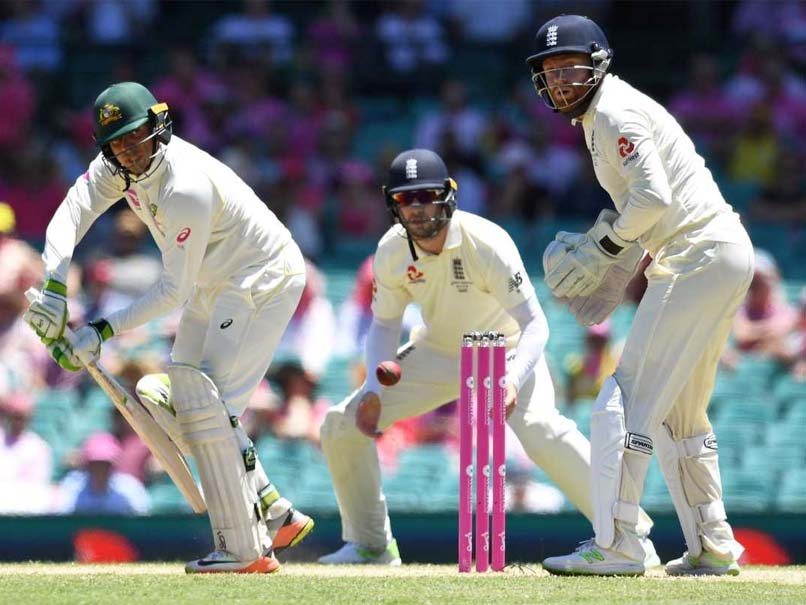 Usman Khawaja realised his long-awaited dream of scoring his Test century as Australia roasted England's bowlers on Saturday to open up a 133-run lead with two days to play in the final Ashes Testin Sydney. Khawaja top scored with 171 while Shaun Marsh finished unbeaten on 98 after Steve Smith fell for 83 as Australia built a substantial lead with more runs to come and intense 40 Celsius (104 F) heat forecast for Sunday's fourth day.

Australia have already regained the Ashes with an unassailable 3-0 lead and are looking to close out the series 4-0 after last week's fourth test in Melbourne was drawn. At the close of play on a dispiriting third day for the tourists, who took just two wickets, brothers Shaun and Mitchell Marsh were making merry in an unbroken 104-run partnership as Australia cruised to 479 for four.

Mitchell Marsh clubbed Moeen Ali for two sixes in three balls to be 63 not out off 87 balls at stumps after surviving a leg before wicket review in the final overs.

Khawaja batted for 515 minutes off 381 balls with 18 fours and a six for his maiden Ashes Test hundred.

"You don't get to celebrate Test centuries too much unless you're Steve Smith. You've got to enjoy them when they come,"

Khawaja said. It was the Pakistan-born Khawaja's sixth Test hundred and first in Sydney and came at a time when some former players were calling for his sacking despite scoring two half-centuries earlier in the series.

"It's disappointing," Khawaja said of the criticism.

"When I am scoring runs, I'm elegant and when I'm not scoring runs I'm lazy. Can't seem to win, when things aren't going well.

He fell three runs short of his highest Test score of 174 scored against New Zealand in Brisbane in 2015.

Bairstow with a sharp turner that left the Australian No.3 stranded out of his ground.

It was due reward for the Hampshire leg spinner, who endured the heartbreak of having a leg before wicket review rubbed out for a borderline no-ball when Khawaja was on 132 earlier in the day.

Crane, who at 20 is the youngest specialist spinner to play for England in 90 years, showed plenty of heart to keep plugging away without much luck until dismissing Khawaja.

Crane finished a challenging day with one wicket for 135 off 39 overs.

"It was a pretty tough day," Bairstow said. "We're 150 overs into the innings so there's going to be a few tired bodies out there.

"I thought the way the guys toiled out there and really worked hard was impressive and that's really good to see for us as a side going forward."

Shaun Marsh reached his fourth half-century of the series and survived a review on 22 for a catch behind off Joe Root after the "Snicko" and "Hot Spot" technology could not find supporting evidence.

England earlier claimed Smith's prized wicket before lunch when Ali caught and bowled the Australian skipper when he seemed set to make his fourth century of the series.

Smith, who looked untroubled batting patiently through the morning session, left the field shaking his head after batting for 253 minutes and facing 158 balls.

Smith and Khawaja seized the momentum for Australia with a 188-run stand as England chase a face-saving win after surrendering the Ashes after just three matches.

The skipper has been one of the key differences between the two sides in the series, amassing 687 runs at an average of 137.40 with a top score of 239, his Test best.

There was drama in the final over before lunch when Khawaja survived a review for leg before wicket but only after Crane had been found to have just overstepped for a no-ball.

Comments
Topics mentioned in this article
Usman Khawaja Steven Smith Shaun Marsh The Ashes 2017-18 England Cricket Team Australia Cricket Team Cricket
Get the latest updates on IPL Auction 2023 and check out  IPL 2023 and Live Cricket Score. Like us on Facebook or follow us on Twitter for more sports updates. You can also download the NDTV Cricket app for Android or iOS.