Verbal taunts by Aussies during first Test in Brisbane unsettled several England players with the batsmen struggling in both innings against a fiery Mitchell Johnson. 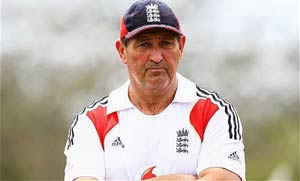 England batting coach Graham Gooch on Monday said anyone in the team getting sledged by Australia should take it as a compliment.

The first Test in Brisbane, which Australia won by 381 runs, was tarnished by constant sledging as frustrations boiled over, culminating in skipper Michael Clarke being caught by a stump microphone telling England's Jimmy Anderson to expect a broken arm.

The taunts unsettled several England players with the batsmen struggling in both innings against a fiery Mitchell Johnson. (Bring it on, Root tells Johnson)

Gooch, a 118-Test veteran, believes the tourists will face more goading in the second Test this week in Adelaide and said it generally happened when a batsman or bowler was playing well.

"If someone comes with sledging, people deal with it in different ways," said the former England captain who scored nearly 9,000 Test runs.

"Some people it motivates, makes them play better, more determined.

"Some people it can unsettle. But generally sledging is about getting you to play the man and not the ball, get your focus off the ball.

"Players I've seen who've dealt with it best either smile at the opposition or take it as a compliment. Generally if you get sledged, you're doing okay."

Gooch said the English players could have handled the Brisbane incident better.

Johnson "bowled fast and inconvenienced a few of our players with the short ball", said Gooch, but added that short-pitched bowling was nothing new and the England batsmen simply had to deal with it better.

"The crowd whipped it up a bit and we didn't handle the situation as well as we should have, so we've got to improve," he added.

"We have a simple plan. Play better."

Comments
Topics mentioned in this article
Cricket Australia Cricket Team Glenn McGrath Graham Alan Gooch Sreesanth Kevin Pietersen John Michael Arthur Michael Clarke Mitchell Johnson Shane Watson The Ashes 2013 Joe Root The Ashes, 2013-14
Get the latest updates on IND vs NZ 2021, check out the Schedule and Live Score . Like us on Facebook or follow us on Twitter for more sports updates. You can also download the NDTV Cricket app for Android or iOS.