Australia pacer Ryan Harris launched a foul-mouthed tweet after he was reportedly refused entry into a Perth casino for being drunk. 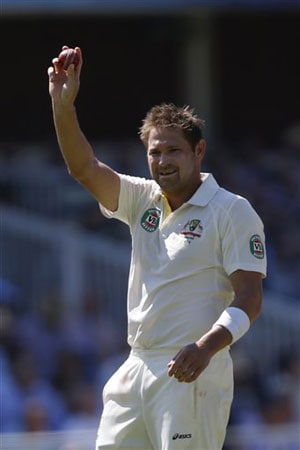 Australia's Ryan Harris has discovered that winning the Ashes does not guarantee access to Perth's casino, with the bowler launching a foul-mouthed tweet after he was reportedly refused entry for being drunk. (Click here for full Ashes coverage)

The team's celebrations after clinching the series against England on Tuesday, hosted by former great Shane Warne, stretched long into the night with Harris, in particular, letting off steam.

"A tip for all those heading to Perth! Avoid the crown or casino! Shithole, can't get in if you have had a drink #shitplace#dickheads," he tweeted, reportedly at 3:30 am.

The tweet has since been removed but newspapers took a screenshot and it was widely reproduced on Wednesday. Strike bowler Harris, who has played a key role in the Ashes series, won widespread sympathy on social media. (Australia celebrate win with unique pitch tribute)

"Poor old Ryan Harris. Apparently denied entry to the Crown in Perth for being too drunk last night. Australian Fun Police at their finest," said one tweet. Another said "Feel ya pain son."

In contrast to Harris, Michael Clarke was apparently allowed in, with the Australian skipper tweeting his thanks to Warne, who hosted a party for the team at the Perth nightspot. "Can't thank @warne888 enough for having us last night. The boys and their partners had a night we will remember forever," Clarke tweeted. (Also read: Ashes win justifies Arthur's sacking, says James Sutherland)

His wife Kyly added: "What a night of celebrations."

All-rounder Shane Watson, who scored a century in the Perth Test, said he went to bed before the Harris incident. "Obviously things for a period of time might not have gone exactly right. But in the end we were just there to have a great time," he told reporters.

"There was no intention other than making the most of winning the Ashes back. You do have to make the most of those good times because they're not always there. So it was extremely special last night," he added.

Comments
Topics mentioned in this article
Cricket The Ashes 2013 Carlton Cole Danny Gabbidon Eoin Morgan Ryan Harris The Ashes, 2013-14
Get the latest updates on IPL 2020, check out the IPL Schedule for 2020 and Indian Premier League (IPL) Cricket live score . Like us on Facebook or follow us on Twitter for more sports updates. You can also download the NDTV Cricket app for Android or iOS.