Flower said he would not identify individual players facing the chop, with reports that high-profile batsman Kevin Pietersen, one of the big English failures in the series, was under pressure. 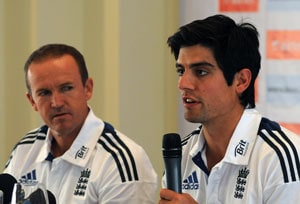 Coach Andy Flower warned on Monday there was more pain to come in the wake of England's Ashes series meltdown in Australia.

Australia completed a 5-0 clean sweep on Sunday, routing the hapless tourists for 166 off just 31.4 overs to carry off a 281-run victory in three days in the Sydney Test.

Such was the magnitude of the series defeat that major ramifications are expected for English cricket, just months after they beat Australia 3-0 in England.

Flower said he would not identify individual players facing the chop, with reports that high-profile batsman Kevin Pietersen, one of the big English failures in the series, was under pressure. (Related: England become first team to lose by 5-0 margin five times)

Pietersen, who averages just over 47 in 104 Tests, was dismissed for three and six in the final Test to finish with 294 runs in the series at 29.40.

Flower, who has said he will not be standing down as team coach, said he was prepared to make tough decisions, while admitting the nightmare series was the end of an era.

Asked directly whether Pietersen would be part of England's future, Flower told reporters: "This will be a new start, and so it should be.

"It does feel like the end of some type of era. We might have to take a little more pain before we have sustained success again.

"And we might have to ask for a little patience in that regard over the coming months."

As well as speculation over the future of Pietersen, 31-year-old wicketkeeper Matt Prior, who was dropped for the last two Tests, could also face the axe.

"I'm not going to discuss individuals, but looking at it a little more holistically, I think it will be the start of something new," Flower said.

"I think Alastair Cook as captain can lead that renewal and rebuilding (of) the England cricket side.

"It's quite a bitter pill to swallow. But that's what it is and we have to face up to that reality."

England have five months before they host Sri Lanka for a two-Test series, by which time a full review into the Australia debacle is expected to be completed.

Cook said after the Sydney defeat that he knows what it takes to rebuild shattered England.

He said he has been given a vote of confidence from the England and Wales Cricket Board to continue as captain as England look to regroup after sliding to fourth in the International Cricket Council rankings, below Australia at three.

"I am desperate to try and turn it around. I feel as if I am the right man to do it," he said at his post-match conference.

"If I'm not and people higher up want a change because they think that's the best way, I have to take it on the chin."