Michael Clarke says 32-year-old Mitchell Johnson's sustained aggressive bowling throughout the series was an amazing achievement that reminded him of greats like Glenn McGrath and Brett Lee. The lethal left-arm paceman captured three for 40 as England surrendered to a 281-run defeat in the final Test to finish with 37 wickets for the series at 13.97. (The best images from the third day's play)

Johnson edged wicketkeeper Brad Haddin as the man of the series, and he set the tone for Australia's domination with man-of-the-match honours in three of the five Tests.

"Man of the series, who would have thought? Except me and perhaps Mitch. He's been an amazing bowler for a long time. I think the way he's come back into this team... he's bowled with great aggression. 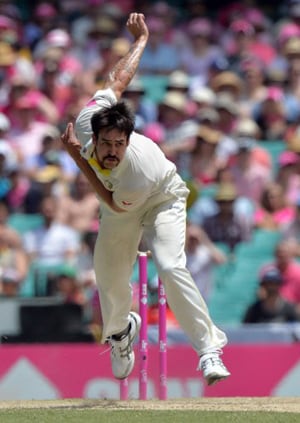 "To be able to do bowl at that pace is one thing, to do it for five Test matches, every single innings to be able to back it up is an amazing achievement."

"Mitchell bowled a couple of spells in this series that are without doubt as good a spells as I've seen in my career," the skipper said.

"Mitch's spells certainly match the greats, if not better. He deserves all the credit he's received, he's copped a lot of criticism, he's been dropped from the team.

"No one in the world can doubt Mitchell Johnson's character ever again.

"He's as tough a cricketer as I've played with, to be able to come back from the criticism he's copped, to be dropped at an older age and have the attitude and hunger to say 'No, I'm not going to give up', credit to him. He deserves the accolades."

Johnson, who has now taken 242 Test wickets, said once he got over his initial nerves in the opening Brisbane Test he helped set the tone with aggressive fast bowling.

"They were good nerves and once I got into my rhythm and stuck to the plans with the support of Michael Clarke and knowing I was going to bowl in short spells I could be aggressive and go hard at their batters," he said.

"That set the tone that first Test and that stuck with us, especially seeing their tail the way they were jumping around.

"I'm absolutely exhausted now. It's a huge relief to finish the Test series but we all feel confident we can play back-to-back cricket, we've shown that, keep our speeds up, keep our accuracy up and keep working well as a bowling unit."

Comments
Topics mentioned in this article
Cricket Australia Cricket Team The Ashes 2013 Mitchell Johnson Michael Clarke The Ashes, 2013-14
Get the latest updates on Fifa Worldcup 2022 and check out  Fifa World Cup Schedule, Stats and Live Cricket Score. Like us on Facebook or follow us on Twitter for more sports updates. You can also download the NDTV Cricket app for Android or iOS.