The Ashes: Alastair Cook says every English player let themselves down

The crushing defeat at the SCG -- with more than two days to spare after winning the toss and sending Australia in to bat -- is expected to have major ramifications for English cricket just months after they beat Australia 3-0 in England. 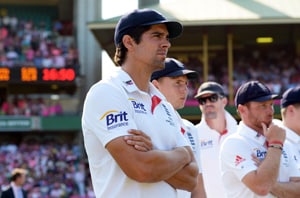 Captain Alastair Cook said on Sunday he knows what it takes to rebuild shattered England from the rubble of their 5-0 Ashes series humiliation against Australia.

The abject tourists collapsed all out for 166 off just 31.4 overs and in 147 minutes to go down by a whopping 281 runs to the dominant Australians in the final Sydney Test. (Read: Australia rise to No.3 in Test rankings)

The crushing defeat -- with more than two days to spare after winning the toss and sending Australia in to bat -- is expected to have major ramifications for English cricket just months after they beat Australia 3-0 in England. (Read: Mitchell Johnson credits 'fatherhood' to upturn in form)

Cook said he has been given the vote of confidence from the England and Wales Cricket Board (ECB) to continue on as captain as England look to rebuild after sliding to fourth in the International Cricket Council rankings below Australia at three. (Read: Australia ready for South Africa challenge, says Michael Clarke)

Cook quipped about the news of the ECB support, telling reporters: "I was given the vote of confidence from the board which usually means in football terms you have two weeks and then you're on your bike.

"But I am desperate to try and turn it around. I feel as if I am the right man to do it.

"If I'm not and people higher up want a change because they think that's the best way, I have to take it on the chin."

Cook, who scored just 246 runs at 24.60 in the series, said he had the qualities to take the England team forward.

"I have a lot of experience as a player. I have seen a 5-nil before and I've seen the drive and determination which that caused that team then. I know what that takes to do," he said. 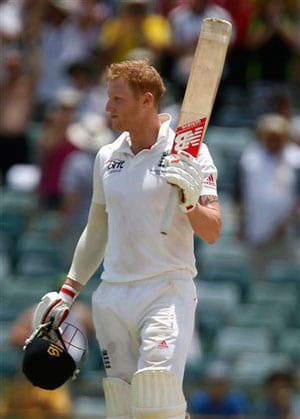 Cook said only all-rounder Ben Stokes (in pic, left) and paceman Stuart Broad played to their potential on a miserable tour where senior batsmen Ian Bell and Kevin Pietersen both averaged less than 30 in the series.

"I think we've seen some very good stuff from Ben Stokes. He looks like he can balance our side, something we've been trying for a long time. I think he's obviously been the find of the tour," Cook said.

"Every player will be feeling that they let themselves down because we haven't performed. Only Broady (Broad) and Stokesy have delivered close to their potential. I think everyone else will be hurting.

"I think what it does mean when you lose 5-0 is a lot of places are for grabs. That should be a real inspiration for people outside the team and also for people inside the team.

"As a side we've let the supporters down because we haven't played very well. The results suggest that. The work ethic is there, we've just got to go back to basics."

Cook said he felt anger and frustration within because of England's woeful Test results, but added "the buck stops with me".

Comments
Topics mentioned in this article
Cricket Stuart Broad Ben Stokes Michael Clarke Alastair Cook The Ashes 2013 The Ashes, 2013-14
Get the latest updates on Fifa Worldcup 2022 and check out  Fifa World Cup Schedule, Stats and Live Cricket Score. Like us on Facebook or follow us on Twitter for more sports updates. You can also download the NDTV Cricket app for Android or iOS.