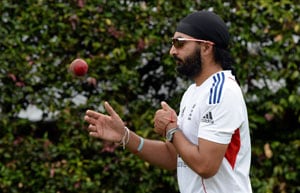 While England players were expected to introspect on their shoddy on-field showing, the 31-year-old, according to UK's The Mirror, was busy confessing his love for American girls and invited Alison to his hotel apartment for the night. "I thought it was a bit strange he would be behaving like that so soon after they had lost," said Alison whose surname was withheld in the report. "I wanted to talk to him about cricket but he had no intentions of that. All he seemed interested in was getting me over to the hotel." (Read: Full story in Mirror)

Panesar and Alison - in her 20s - came into contact through a dating phone app. The spinner is learnt to have invited her to his room as England players weren't allowed out. "I'd been to the Melbourne game, my first cricket match, the day before so I realised who he was," said Alison. "I sent a message because I wondered whether it was really him. I was shocked when it was." (Related: England first team to lost by 5-0 margin five times)

Alison was also quoted as saying that she eventually turned down Panesar's offer. "I would have met him in a public place but I was not going to meet him at his apartment by myself. You would hope people do not do that."

At a time when skipper Alastair Cook has said that England players have let themselves down, Panesar's reported off-field exploits may let teammates down further. It may not surprise them though.

Panesar has been a controversial figure off the cricket field and his alleged 'misdemeanors' are well-known. Last year, he was evicted from a nightclub in England after he allegedly urinated on bouncers. This was followed by a 'secret divorce' from his wife with whom he had shared a tumultuous life.

The latest incident, although obviously not against the law or fundamentals of most societies, may raise eyebrows because of its timing.