Australia climbed above England and Pakistan from fifth to third on the International Cricket Council world rankings, behind South Africa and India, after a 281-run trouncing of England to sweep the Ashes series in Sydney. 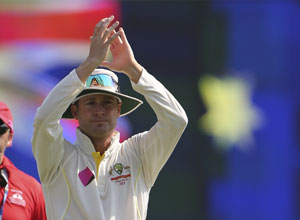 Michael Clarke said Australia will take the greatest bowling attack in world cricket to South Africa next month in a bid to challenge the number one Test side, after securing a 5-0 Ashes whitewash over England on Sunday.

Australia climbed above England and Pakistan from fifth to third on the International Cricket Council world rankings, behind South Africa and India, after a 281-run trouncing of England to sweep the Ashes series in Sydney.

The victorious Australian skipper knows that Graeme Smith's Proteas will give his Australians an idea of where they stand in Test cricket after a lopsided series against England, which culminated in a three-day final Test win.

"We have the greatest attack in the world and they've shown it," Clarke said.

"It's certainly going to be a challenge for us to perform over there and then our next Test series is in the UAE against Pakistan which is going to be extremely tough as well.

"Playing away from home in international cricket seems to be hard to get results. We believe we have the team to have success."

Clarke said it will take more than one series win to prove Australia are the best team in world cricket.

"We are not going to win in South Africa and all of a sudden think we're the best team in the world," he said.

"It's not about that. It's about consistency home and away over long periods of time and if you do that you will get the results you're after."

Clarke said it was satisfying to turn things around after a poor start to last year.

"It's been a roller-coaster ride... the start of 2013 certainly didn't go anywhere near as well as we would have liked," he said.

"I think that's what feels so satisfying at the moment. We've been able to turn things around.

"I don't want to disrespect anyone in that 2006-07 team (last Australian team to win 5-0 series) to say that this is a better win than then.

"I just think it's a different time, different era. To me it's as special and probably more personal because I'm captain.

Australia coach Darren Lehmann said he took over a team which needed direction when appointed in England last year and he put his faith in a band of experienced players to win back the urn at home after three-straight series of Ashes failure.

Australia's Mitchell Johnson delivered in lethal fashion with a haul of 37 wickets at 13.9 to edge out veteran wicketkeeper-batsman Brad Haddin as player of the series.

Lehmann admitted the extent of his team's dominance surprised even him but said they still had plenty more to prove.

"I thought we had the makings of winning the Ashes comfortably, but not 5-0.

"We need to move forward as a team and win away from home."

Comments
Topics mentioned in this article
Cricket South Africa Cricket Team England Cricket Team Australia Cricket Team Michael Clarke The Ashes 2013 The Ashes, 2013-14
Get the latest updates on Fifa Worldcup 2022 and check out  Fifa World Cup Schedule, Stats and Live Cricket Score. Like us on Facebook or follow us on Twitter for more sports updates. You can also download the NDTV Cricket app for Android or iOS.