The England team collapsed like a pack of cards in the final Test. Their 281-run defeat sent waves of joy Down Under as the hosts completed a rare and stunning Ashes whitewash. 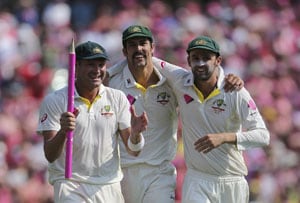 The Australian press on Sunday went into overdrive to hail the national team for claiming the Ashes 5-0 and humiliating England on the cricket field. (Match report)

Having ripped the team apart when it lost in England last year, Australian newspapers and websites forgave, forgot and felicitated the national team for a commendable effort. After all, Australia became the first team to register 5-0 series whitewash on five occasions. "Australia you beauty: It's a whitewash in The Ashes," screamed the headline on The Australian. The report on the website was equally generous in praising the home team and flaying the tourists. "DEATH was called at 4.23pm," read the first line. "This (Ashes triumph) is surely what Ernest Hemingway had in mind when he wrote "Death in the Afternoon''. For this Australian cricket team has shown over the past six weeks that bullfighting is not the only blood sport."

Another daily - Sydney Morning Herald - too was equally jubilant with Australia's unforgiving approach in the series. "A banged up pace bowler and a once forgotten man have led Australia to a history Ashes whitewash with a comprehensive 281 win at the SCG on Sunday afternoon," read the first line of the main report.

It was a 'super Sunday' Down Under with old sporting heroes giving the nation a belated Christmas present. While the likes of Mitchell Johnson, Ryan Harris and Brad Haddin shone on the cricket pitch, there was another hero - with a racquet - in Brisbane.

Lleyton Hewitt stunned top-seed Roger Federer to claim the title at Brisbane International. The news almost coincided with the cricket team's achievement, making it a memorable day. "Hewitt, Haddin, Johnson, Harris - life is good past 30 for Aussies!" read a tweet from a fan. Another predicted an Aussie revival in sports in the coming time. "Bang on start to 2014. This is the year where Down Under will be all over..." read his message on the micro-blogging site.

While predicting the future of Aussie sports in the new year may be complex, sport persons here have surely sent hopes skywards.

Comments
Topics mentioned in this article
Cricket Australia Cricket Team England Cricket Team The Ashes 2013 The Ashes, 2013-14
Get the latest updates on Fifa Worldcup 2022 and check out  Fifa World Cup Schedule, Stats and Live Cricket Score. Like us on Facebook or follow us on Twitter for more sports updates. You can also download the NDTV Cricket app for Android or iOS.